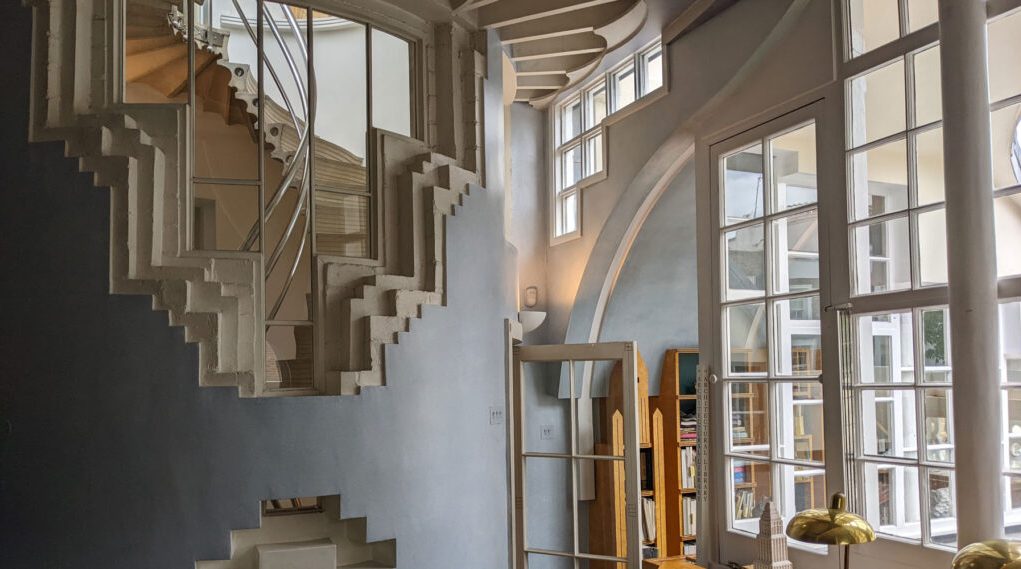 A slightly unassuming house in Holland Park conceals a remarkable interior — a house packed full of early Post-Modernist designs — and is now, very occasionally open to the public. 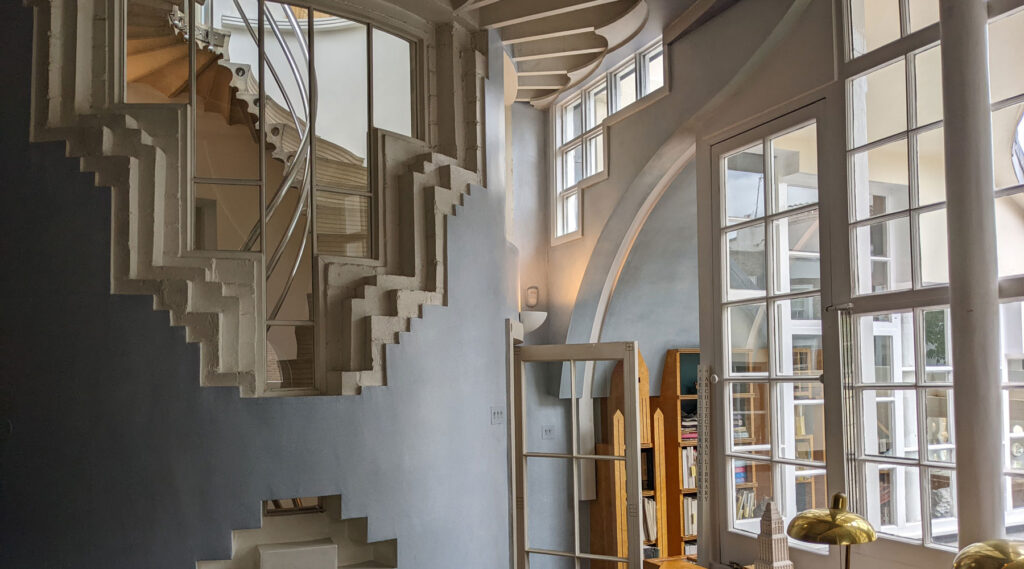 Externally it looks like a normal sort of house for the area, but the architect Charles Jencks and family gutted most of the interior and built something that is really quite stunning. Not necessarily nice, as that’s down to individual tastes, but it is most certainly stunning.

In a way, you could take a lot of Post-Modernist architecture buildings, shrink them down, and then use them to fill the house, as it has that air to it, of big architecture that needs to be seen from a distance but reduced to the domestic scale.

There’s the wonderful spiral staircase that with enough chrome and marble to look typically 1980s, but look closely and there’s astrological symbolism in the number of steps between floors and the designs on the steps. Everywhere, the furniture was designed for the spaces. Curved to fit into corners or blocky for special rooms. The cupboards and wardrobes have hardly any long straight edges anywhere. Ziggurats dominate.

The library looks like a city skyline, which is what it was based on, although we’re told that Jencks accepted the idea hadn’t worked. It’s preserved here though. 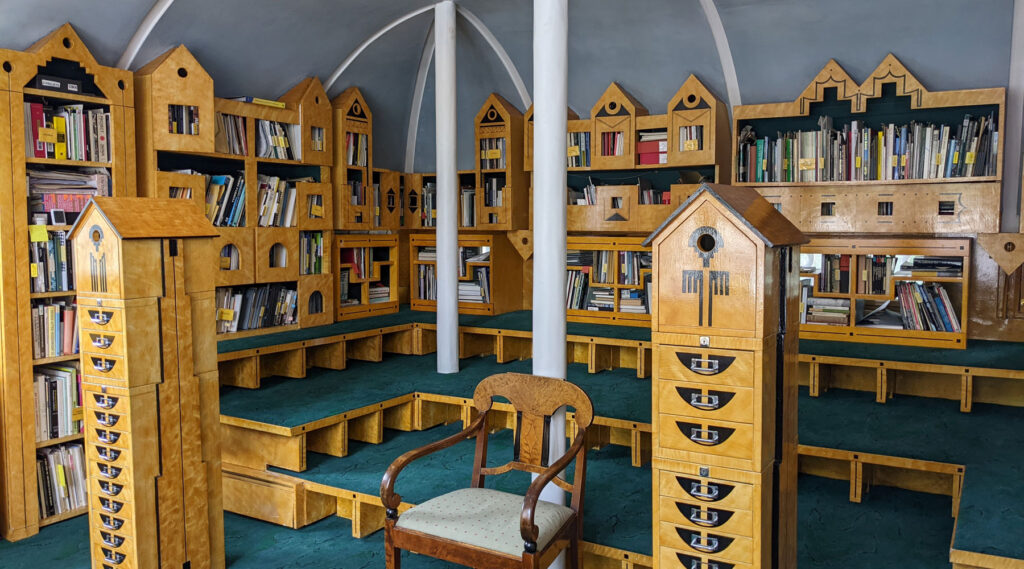 A bath was inspired by the roof of a Roman baroque church, and then flipped upside down to make a communal spa bath space.

The bedrooms are included in the design, in fact, there are only two spaces in the whole building untouched by Modernist hand — a staircase deliberately preserved from the original house, and one bathroom. Maggie Jencks apparently insisted on having one space for herself left alone, and the bathroom looks like the sort of Victorian bathroom that any Holland Park house would have. In a way, it looks unfinished compared to the rest of the house, even though for most of us it’s a luxury bathroom.

Really though, apart from the abundance of design, the house is an experiment – some work better than others, and do look at how they tried novel places for tea towels and paper rolls, and realise that it’s not functional.

There are stairs and steps everywhere, which makes this house very unfriendly to anyone who doesn’t like stairs, but it was built as a private home for people who at the time didn’t need to worry about fitting a stairlift.

But really, it’s the detail that shows an architect’s hand in this slightly mad house. Look at the entry gate and how a painted plaque matches the functioning door entry buzzer on the other side.

You’ll feel stunned when you visit, either from admiration or the sensation of having been hit around the head with something heavy such is the overwhelming level of decoration of the house.

They run tours at times during the year, limited due to it being in a residential area so as to not annoy the neighbours. The next open days have been announced, with tickets available from 5th October to 22nd December, and tours generally take place on Wed, Thur or Fri in the afternoons only.

The tickets cost just £5, and after an introductory film, and a good explanatory book is handed out, you’re pretty much left to wander around at your leisure.

Book tickets from here. They tend to sell out fairly quickly.

The House is just a few minutes from Holland Park tube station on the Central line. 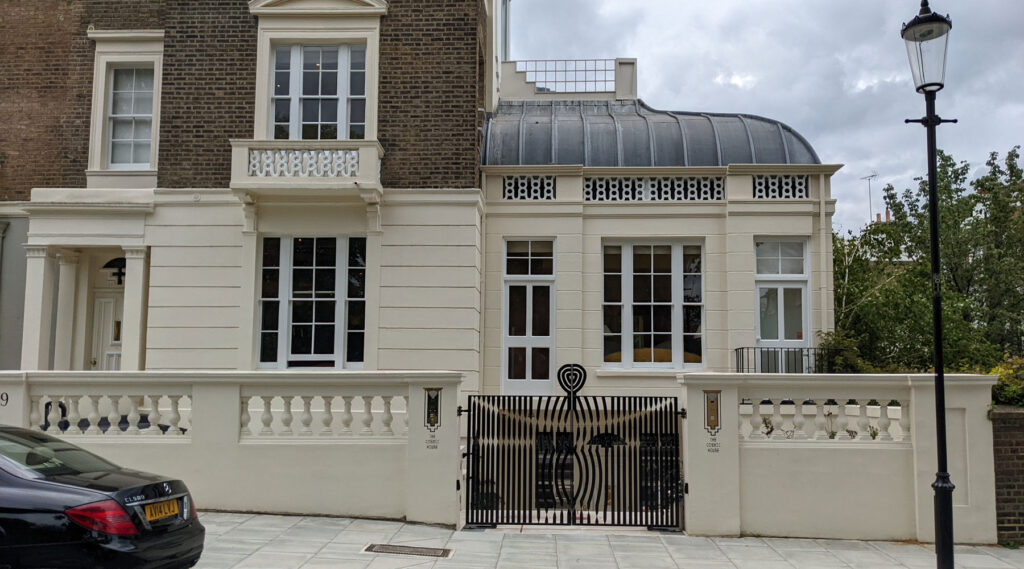 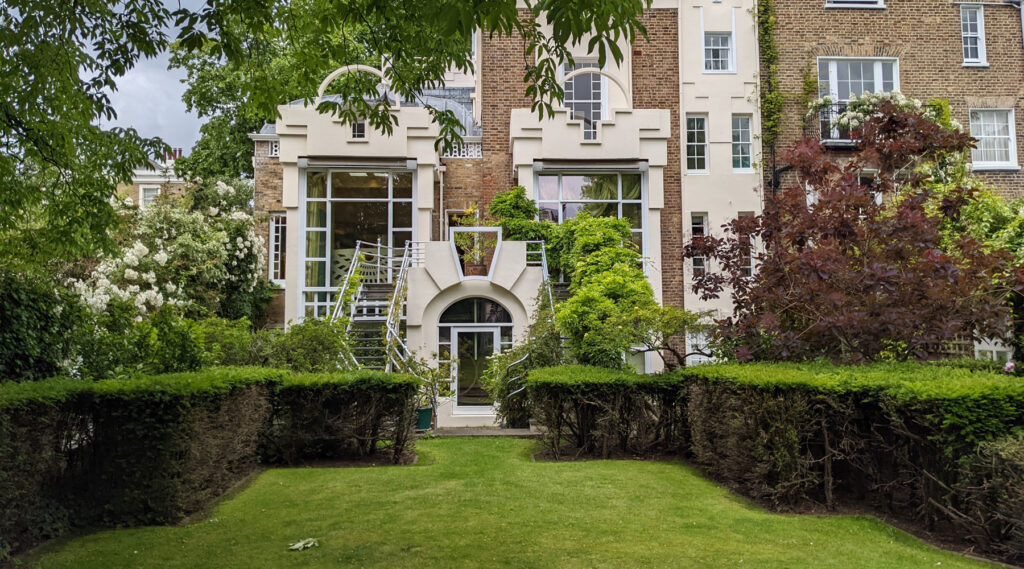 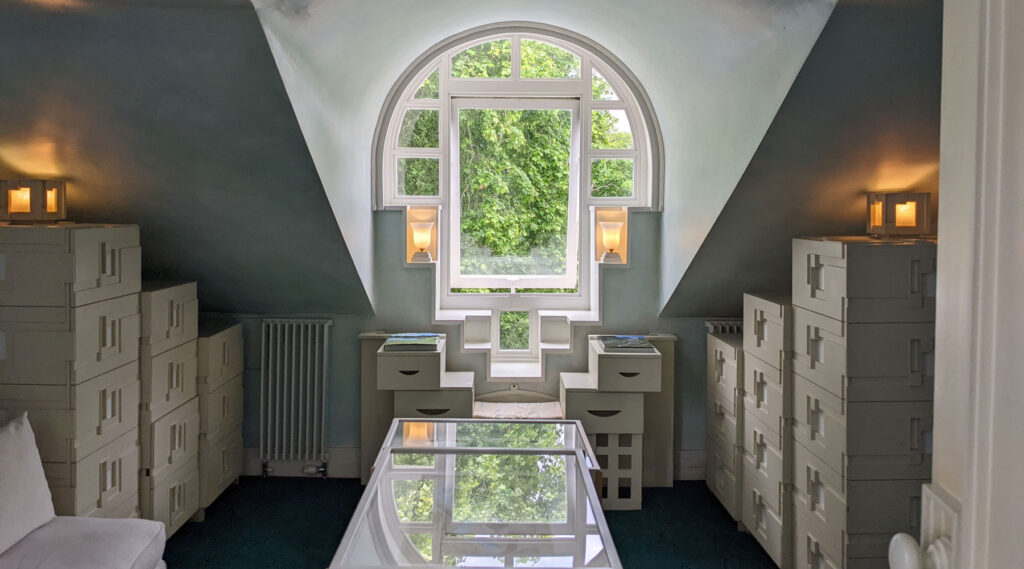 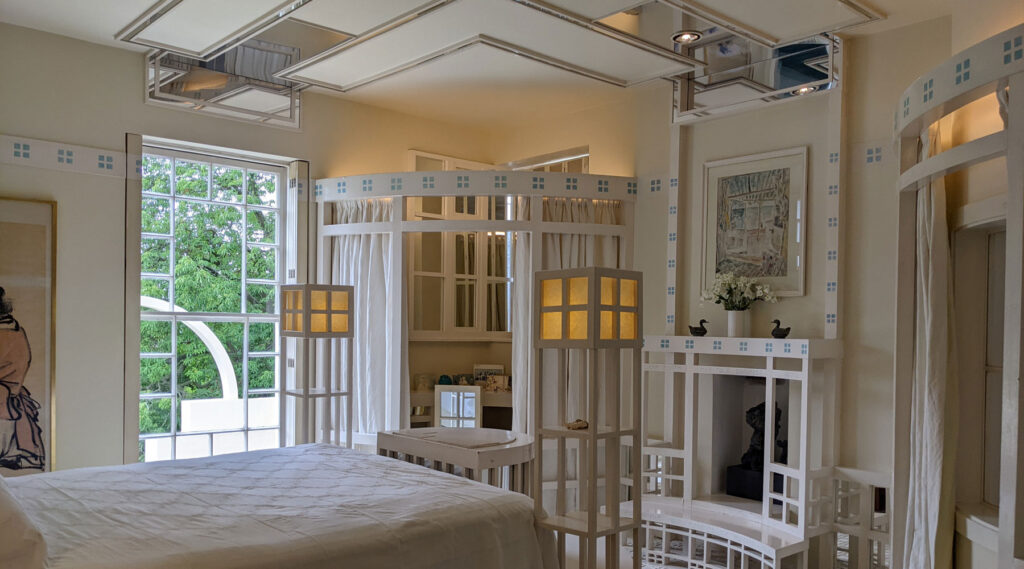 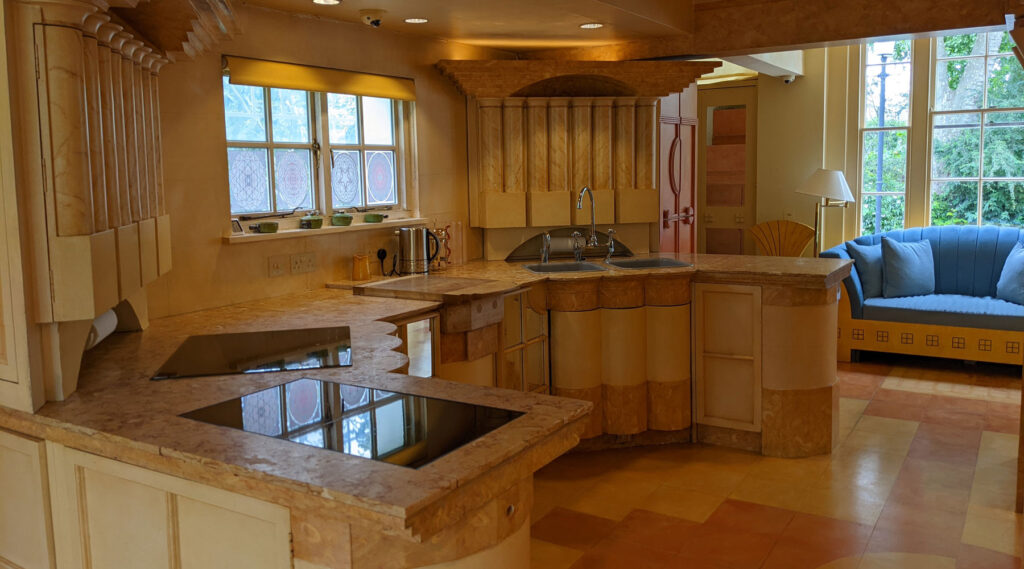 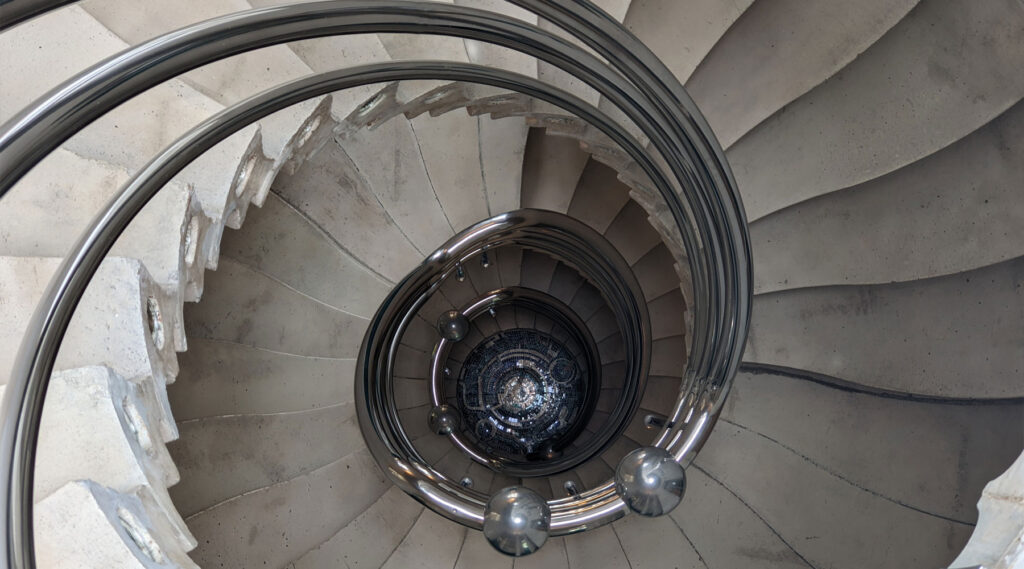 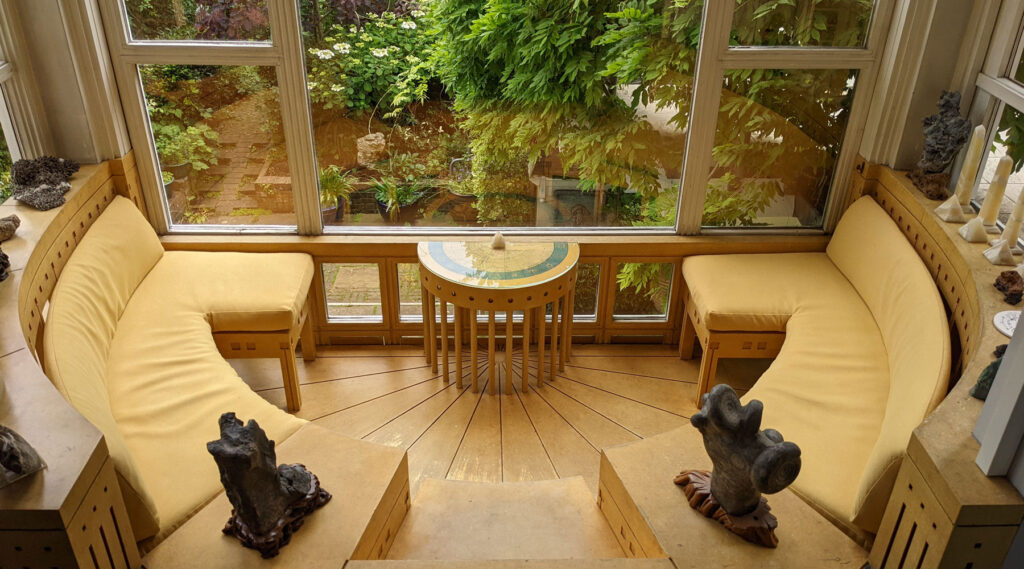