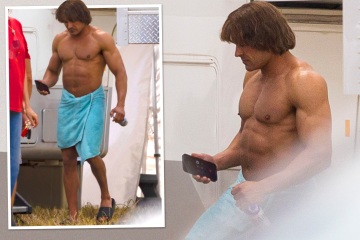 TYSON FURY plans to raise funds for a mental health charity by releasing a music single.

The Gypsy King will fundraise for Talk Club by releasing his own rendition of Neil Diamond’s ‘Sweet Caroline’.

Fury recently recorded his own rendition of Sweet Caroline[/caption]

Fury, 34, has already recorded his version of the iconic anthem, which will be available from November 11 – just before the World Cup

The WBC heavyweight champion said: “Sweet Caroline is a record I’ve always loved and I’m excited to record and release it.

“And thanks to the folks over at Warner Music, they’ve given me the opportunity to do that, and what better time to release it than around the World Cup.”

Fury is no stranger to singing on the microphone, regularly serenading his fans, and wife Paris, after his fights.

All the profits from Fury’s single will go to Talk Club, a charity focused on getting men to open up about their mental health struggles.

Fury dealt with his own issues after his toppling of Wladimir Klitschko in November 2015 and still fights a daily battle with his demons.

He said: “I have been very vocal about my mental health struggle, especially since my comeback.

“It has been widely printed about my highs and lows, ups and downs, so I’ve tried my best to keep talking about it as much as I can and keep trying to smash the stigma.”

Talk Club founders Ben Akers and Gavin Thorpe believe Fury’s involvement will inspire other men battling with depression and other forms of mental health problems to speak up.

They said: “Suicide is the biggest killer of men under 50 in the UK.

“Tyson Fury is a champion, in and out of the ring to many of those men.

“Men see themselves in Tyson, so when he talks – or sings – they listen.”

Fan favourite Fury will be back in action on December 3, locking horns with Derek Chisora in a trilogy fight at the Tottenham Hotspur Stadium.

If you have been affected by any of the issues raised in this article, contact The Samaritans on 116 123.

They are available for free at anytime.

Sen. Cleo Fields says, ‘The people of Louisiana certainly do not...