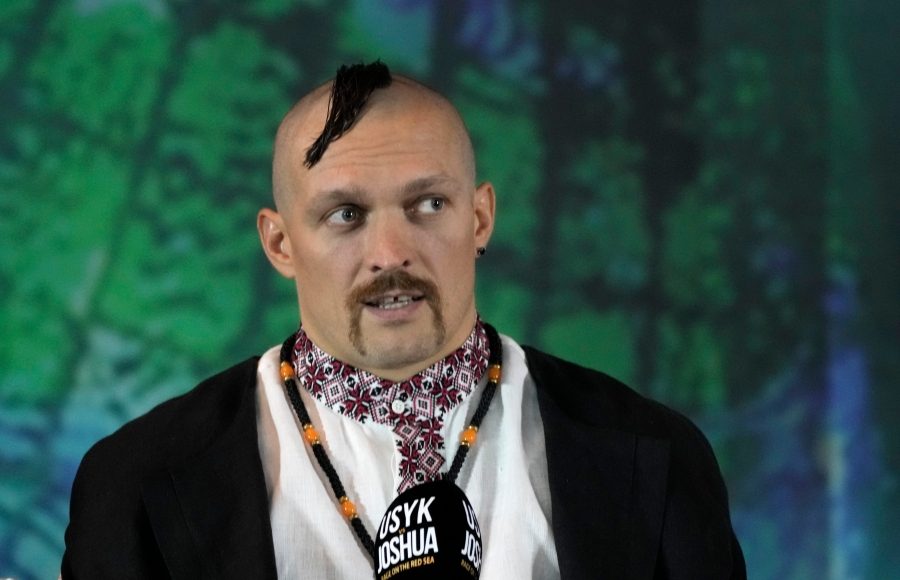 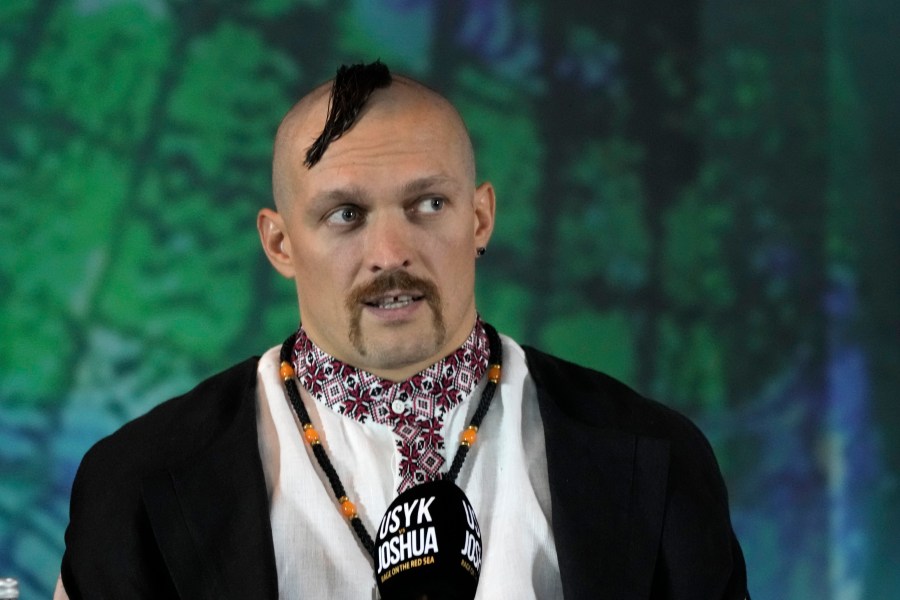 Dressed in traditional Cossack clothing, Oleksandr Usyk followed up his face-off with Anthony Joshua by performing a Ukrainian resistance song on stage.

Clapping his hands rhythmically, Usyk — with a horseshoe mustache and those steely eyes of his — broke into “Oi u luzi chervona kalyna,” a song from 1875 inspired by Ukraine’s 18th-century struggle for independence and now chanted in defiance amid the war with Russia.

Joshua didn’t hang around, exiting the stage while Usyk’s team joined in the singing.

If it wasn’t already clear, Usyk is fighting for much more than his world heavyweight belts in his rematch with Joshua in Saudi Arabia.

Just six months ago, Usyk was patrolling the streets of Kyiv with an automatic rifle as part of his capital city’s Territorial Defense Force, praying he wouldn’t need to pull the trigger.

On Saturday, he’ll be in Jeddah, serving his country in a very different way — by attempting to retain the WBA, IBF and WBO titles he claimed from Joshua in London last September.

“At one point,” Usyk said in the buildup to the rematch, “I went to the hospital where soldiers were wounded and getting rehabilitation, and they asked me to go, to fight (Joshua), to fight for the country.

“They said if you go there, you’re going to help our country even more instead of fighting inside Ukraine.”

How about that for motivation?

Usyk left Ukraine in March for a training camp in Poland and more recently in Dubai. He has had to spend so much time away from his family — he has a wife, Yekaterina, and three kids — and that has not been easy.

But he is determined to provide some joy to his country, where the fight will be broadcast free of charge in a decision by organizers sparked by Usyk’s original push to buy the TV rights for the bout.

“I’m very pleased about that,” he said. “We all worked hard on it.”

Joshua, seeking to become a three-time heavyweight champion, is in the rare position of being an underdog after being dominated in the first fight, losing by unanimous decision.

After a clinic in movement and fast punching by Usyk, Joshua ended the fight slumped on the ropes and with a closed right eye. He hadn’t been able to take advantage of his longer reach and supposed extra power, and struggled with fighting a southpaw.

The 32-year-old Joshua should be better prepared this time, having hired a new trainer in widely esteemed Robert Garcia, a former IBF super-featherweight champion who has Jose Ramirez, Jesse Rodriguez and Mikey Garcia — his younger brother and a four-weight world champion — in his stable.

Joshua will have a different game plan, for sure — he surely won’t attempt to outbox Usyk like last time — but does he have the talent to beat a man who has stepped up from cruiserweight and still looks at home? Usyk appears to have bulked up since the first fight, too.

“I feel like one of my main strengths is that I’m a quick learner, I’m a sponge,” Joshua said Wednesday at the final head-to-head. “But ultimately, apart from all of the learning stuff, it’s a fight. That’s it. Whoever throws the most punches and lands the most punches wins.”

This will be Joshua’s second fight in Saudi Arabia and he arrived in the kingdom a month ago, looking to regain his belts like he did in 2019 when he beat Andy Ruiz Jr. in a rematch in Riyadh.

After that victory, he told reporters that coming to fight in Saudi Arabia has “made me more aware of the issues” in the country. The topic of conversation was “sportswashing” — the use of sports to burnish the kingdom’s image and downplay concerns about its human rights issues.

Still, Joshua is back there again, for a fight the Saudis have reportedly paid $80 million to stage. He has called Saudi Arabia his “second home” and insisted his presence isn’t helping to sanitize the kingdom. When asked again about sportswashing, he said “I don’t know what that is.”

“The world’s in a bad place — I can’t just point one place out,” he said. “If you want to point Saudi out, let’s point everyone out. We’ve all got to do better and that’s where my heart is. The whole world has got to do better if it wants to change.

“I feel like I bring light. Boxing is such a dark industry. There’s so much negativity, tearing each other down, and egos. I’m not really into that, I’m just trying to bring light to people.”

It feels like a defining fight, both for Joshua’s career and for Usyk’s life. Heavyweight title matches can often be accompanied with potential plans for future fights and opponents, but both Joshua and Usyk are very much living in the present.

“He was in touch with high-ranking military officers and he visited the hospitals with injured soldiers. In every conversation, he heard words of blessing and support to take the rematch,” Usyk’s promoter, Alexander Krassyuk, said of his fighter.