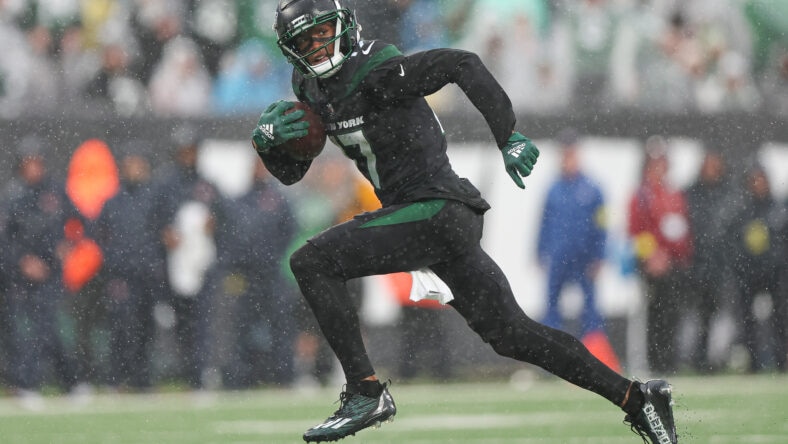 Some thought the Minnesota Vikings might take a receiver with their first-round pick in the 2022 NFL draft. Ultimately, they landed on Georgia safety Lewis Cine. Plenty of wideouts did go in the first round, including two from Ohio State. This weekend Minnesota faces the guy who went 10th overall, Garrett Wilson, after already dealing with the 11th overall pick weeks earlier.

There’s no denying that the Ohio State Buckeyes had some serious talent at the wide receiver position last season. Garrett Wilson was the New York Jets selection at number 10 in the 2022 NFL Draft just before his teammate Chris Olave went to the New Orleans Saints with the 11th pick. Minnesota was never in position to grab either of those players, but with Robert Saleh’s team coming to U.S. Bank Stadium this weekend, they’ll face the second half of the pairing.

When the Vikings traveled across the pond for a Week 4 matchup against the New Orleans Saints, there were a few notable omissions in the starting lineup. Gone was initial starter Jameis Winston, and the supremely talented but never healthy Michael Thomas was also out. That meant the offensive connection would feature Andy Dalton under center and the promising draft pick Olave on the outside.

Going up against a soft Minnesota secondary, Olave made his mark on England. He was targeted seven times, reeling in four for 67 yards and scoring a touchdown. Making just his second start as a professional, it’s hard not to be happy with what the production was. Minnesota allowed New Orleans to make the contest much too close, and that was one of many one-score victories this season.

Wilson wound up with 95 yards on five receptions in a game where New York blew out the Chicago Bears. He also recorded two touchdowns. Last week’s game would’ve represented Wilson’s career-best if not for his Week 2 explosion against the Cleveland Browns. Knowing that he’ll have continuity with White under center again, Wilson had to be excited about a good week of practice.

The Vikings don’t employ a shutdown corner, and while rookie Akayleb Evans is expected to be back, it will be a job for the committee of Patrick Peterson, Chandon Sullivan, and Duke Shelley to keep him in check. Ed Donatell’s secondary has allowed more than one receiver to do their fair share of damage this season, and taking the Jets rookie lightly seems like a misstep.

For the second time this season, Minnesota will face a top draft pick on the edge, and with this one coming from the same school as the guy that burnt them in London, they’ll hope to have better results.