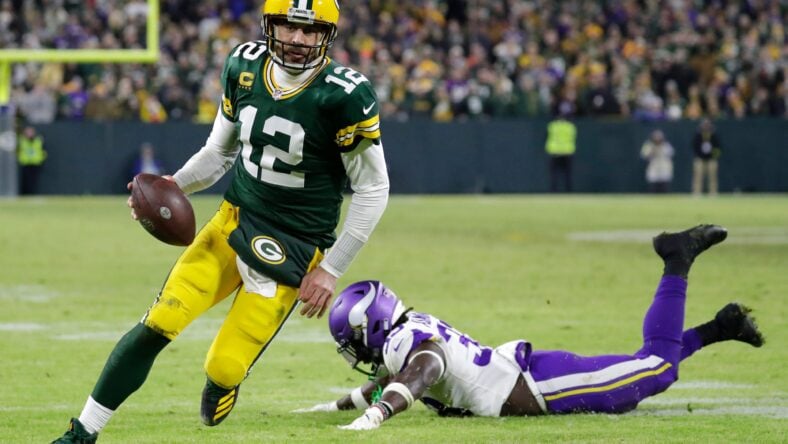 The Vikings have created a handful of rivalries in six decades, but only a few have bothered them as much as the current quarterback of the Green Bay Packers. And Aaron Rodgers, one of the all-time great players in NFL history, may no longer be a problem for the Vikings.

The future Hall of Famer was asked by Lions rookie receiver Jameson Williams for his jersey after the game in Week 18 but answered with the words, “I’m gonna hold on to this one.”

A few moments later, Rodgers walked into the tunnel with his longtime companion Randall Cobb. They walked arm in arm, and the scene looked like the final moments of a movie.

Rodgers proceeded to fuel speculation at the end of the press conference with his words, “I’ll miss the guys. I’ll miss the fans. Yeah, thank you.”

Throughout his career, the Vikings fought all kinds of battles with their longstanding nemesis. Rodgers started 29 games against the purple team, including a postseason contest when he ended the Vikings’ hopes that Adrian Peterson could carry a Joe Webb-quarterbacked team in the 2012 playoffs.

His career stats against the Vikings are remarkable. He threw for 7,431 passing yards and completed 68.1% of his passes. The most outstanding part of his stat line, however, is his touchdown to interception ratio. Over the years, he collected 58 passing touchdowns and just eight interceptions. His passer rating is 108.3, a ridiculous number in such a high number of games.

The overall record of the Rodgers-led Packers against the Vikings is 18-11-1. It was a lopsided rivalry before Mike Zimmer arrived. Zimmer’s Vikings were 6-8-1, and O’Connell’s teams are 1-1. All other Vikings coaches were 4-9.

Rodgers is a one-time Super Bowl champion, a challenging feat to accomplish but a low number for a quarterback of his caliber. That just proves that football is the ultimate team game. One player can increase the odds but never win without a good team around him. Sometimes even that is not enough. Only a few quarterbacks in NFL history were as talented as the career Packer. He changed the game by simply refusing to throw interceptions while still distributing the ball into tight windows with legendary accuracy.

Of course, Rodgers hinted at his career ending in the past, which has not happened. The last three offseasons were filled with Rodgers as a central talking point in the NFL universe, and he stayed with the Packers. In addition, he could request a trade and suit up for a different organization. Everything seems to be on the table at this point.

Rodgers’ 2022 season ended with a loss at home against the Detroit Lions. A win would’ve given the Packers a spot in the wildcard round, including a trip to California and a matchup with the 49ers. But the Packers lost, and Rodgers didn’t look as sharp as in the past — a common theme in his 2022 season.

If it was indeed the last game of Aaron Rodgers for the Packers, Jordan Love would become his successor. Packers GM Brian Gutekunst selected Love in the first round of the 2020 draft without needing a new quarterback. That is how the Packers do business. He sat behind Rodgers for three seasons, the same thing the Packers did with Rodgers, who sat behind Favre for the same three campaigns after his draft.

No matter what the future holds, it would be a strange experience to see the Packers without Rodgers under center.

Janik Eckardt is a football fan who likes numbers and stats. The Vikings became his favorite team despite their quarterback at the time, Christian Ponder. He is a walking soccer encyclopedia, loves watching sitcoms, and Classic rock is his music genre of choice. Follow him on Twitter if you like the Vikings: @JanikEckardt