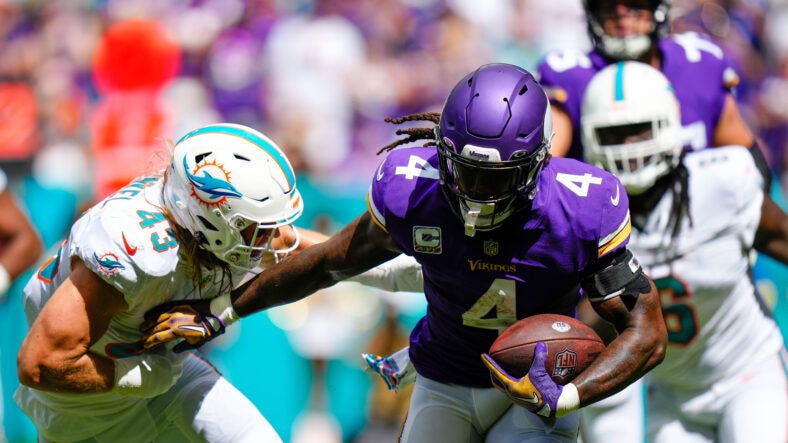 The Minnesota Vikings offense has transformed under the leadership of rookie head coach Kevin O’Connell. For the last few seasons, the offense has run through the running back, namely Dalvin Cook. Explosive downfield passes would come after the Vikings had established the run. The Vikings offense found itself in trouble if the run wasn’t established.

Things have changed under O’Connell, and the Vikings are a more pass-focused offense. At times, I’ve felt Cook has been underused, and a more even balance between pass and run would be for the best. If O’Connell can find that right balance as we advance, the Vikings will have a better offense.

Back in the Top 5

Despite some claims that Cook is “washed,” the Vikings running back moved up to fifth among NFL rushing leaders after last week’s 86 rushing yards performance against the Jets. He finished last season in fifth place and was second the season before. It did appear Cook might not be in the higher echelons of running back yards this season. A few weeks ago, he was outside the top 10, but consistent performance and good health have seen him move up the list. He is now just 73 yards away from a fourth consecutive 1000 rushing yard season.

Before the season started, I predicted a possible career year for Cook. My belief was the running back wouldn’t carry the burden of running the ball 25-30 times a game. I suggested the optimal usage of 20 rushes and five targets in the passing game. Currently, he is averaging 16.5 rushing attempts per game and 3.5 targets in the passing game. Slightly down from where I thought; however, Cook has rushed over 20 times in the last two games and has at least five targets in four of the previous six games. We are trending towards that optimal range as we come to the business end of the season.

My theory was that less usage would lead to Cook staying healthy and perhaps playing an entire regular season for the first time in his career. It’s so far, so good in that regard, barring a slight blemish.

Cook suffered a subluxation of his left shoulder in the third quarter of the Vikings Week 3 victory over Detroit. It caused him to miss the rest of that game, but he was back on the field in Week 4 against New Orleans. Cook admitted afterward he had chosen not to wear a shoulder harness in the game, something he said was a mistake. Cook has a lingering shoulder problem that he might play through until the end of his career with the aid of a harness.

One criticism Cook has faced this season is that he doesn’t “run hard” anymore. There is some weight to that argument. No. 4 will look for the sideline rather than take on contact. Given his shoulder, it shouldn’t be surprising that he doesn’t put himself in jeopardy unnecessarily. He has shown this year that he can still put up the numbers.

As well as closing in on 1000 rushing yards, he is doing at 4.7 yards per carry, and he already has seven rushing touchdowns. He has 27 catches for 157 yards and a touchdown.

Now, it should be pointed out that they have played Aaron Rodgers and his dodgy thumb, Josh Allen’s dodgy elbow, Daniel Jones, Justin Fields, and Trevor Lawrence during that span of games. Still, I expected the Lions defense to be good this season and was surprised when the season started, and they were absolutely terrible.

After the murderer’s row of defenses the Vikings have played in recent weeks, don’t expect it to get any easier in Detroit. However, I think this is a game for Cook to excel. He rushed for 96 yards and a touchdown off of just 17 carries in the Week 3 meeting in Minnesota. There is potential for an even bigger day if the Lions employ the same tactic they did in the first encounter, which was to restrict Justin Jefferson at all costs.

The Florida man is still a vital cog in this Vikings offense, with a strong finish to the season. It could yet be his best as a Viking.