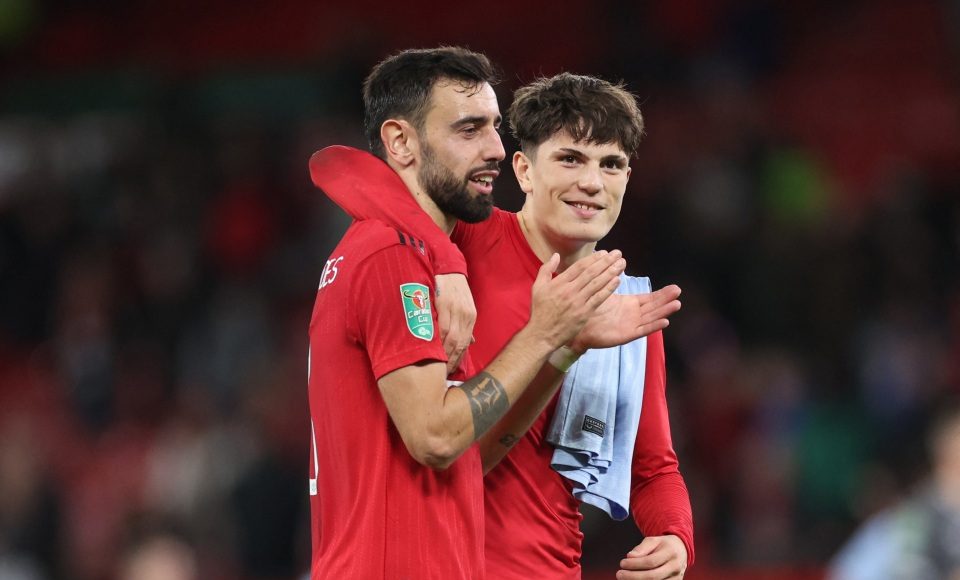 ALEJANDRO GERNACHO was hailed for his game-changing performance against Aston Villa.

The forward came on after an hour in United’s League Cup tie against Unai Emery’s Aston Villa.

This angle of Alejandro Garnacho's assist

Villa were leading at the time after Ollie Watkins opened the scoring and Anthony Martial levelled.

Garnacho’s impact was immediate as he assisted Bruno Fernandes to put United 3-2 up and later Scott McTominay to finish the game.

It was his delicious curling cross to McTominay which was the hearts of fans online.

One said: “Great adjustments by Ten Hag. Moving Bruno back to the #10 and Garnacho on was a game changer.

“End the Van de Beek experiment and stick with what we know works. We’ve got some players man. Nice response.

Another added: “I will watch this sensational assist all night.”

United boss Erik ten Hag hinted a regular role in the starting 11 could be within Garnacho’s reach if he continues to shine.

Ten Hag said: “Can he have a regular role? Depends on how his approach, how his attitude, when he keeps working, keeps this attitude, then it’s possible.

“That he keeps the attitude he wants to improve every day and he’s doing the right things in his lifestyle, then it’s possible.

“As you can see, he has capabilities that contribute to attacking football, he has something he can break open a really compact defending line.

“I think all teams who want to attack want to play in an opponent’s half, they need players like them, he can outplay them.

“And also, in the final decisions, he can do the right things. Once again, it depends on how his attitude, can he also do the defending stuff, the discipline, when he can do that, it’s possible.”