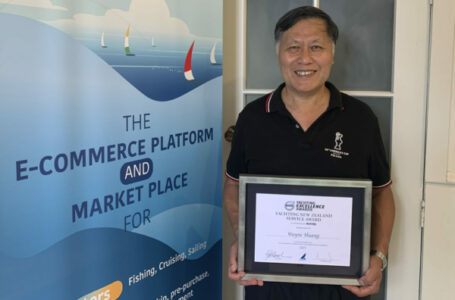 As 2022 winds to a close, and so too the Howick 175 anniversary celebrations, Wayne Huang shares his 25 years of experience as a new migrant in Howick

Howick is a great place to live, do business and raise a family.

I am currently serving my fourth term as Rear Commodore (power) at Bucklands Beach Yacht Club (BBYC) and am newly-elected to the Board of Trustees at Farm Cove Intermediate School where my son is studying.

I strongly believe that I made the right decision to migrate to New Zealand and choose Pakuranga as a place to settle 25 years ago.

After graduating with an MCom from the University of Auckland in 1998, I set up and ran my own successful education business for 20 years.

This enabled me to provide overseas students with English and New Zealand Diploma courses. My current focus is on digital marine charter and on- and off-water event management in Auckland. ShareBoating is the name of the company.

In addition to running my own businesses, I have been fortunate enough to have a few ‘firsts’ in Howick. I credit the openness, inclusiveness and friendliness of the people of Howick for this success.

For example, I was the first Asian migrant to serve (for two terms) as deputy chairman of the Botany Community Board, Manukau City Council (2007-2010).

I also served the inaugural term of the Howick Local Board, Auckland Council, from 2010 to 2013.

These positions allowed me to bring a unique perspective to local government. I initiated the first mooncake festival in Howick and created the first Eastern Auckland tourism map.

I was elected as the first Asian member of the Board of Trustees at Sunnyhills Primary School, Pakuranga, from 2013 to 2016, giving me experience in school governance, and I was able to initiate several successful projects for our local school.

In 2019, I became the first Asian Rear Commodore (power) at BBYC.

I was re-elected for a fourth term in July 2022. During this time I have been able to attract iconic New Zealand companies like Fisher & Paykel to support our local club and significantly raise younger Asian participation in junior learn to sail programmes.

In 2021, I won an excellence award from Yachting New Zealand. My son earned first place in the 2022 BBYC Open Skiff Fleet Autumn Series.

For our own local culture, for 16 years I served voluntarily as vice chair of the Chinese Chamber of Commerce which is the largest local Asian business association in New Zealand.

I am also the first president in New Zealand of Sun Yat-sen University Alumni Association and, currently, I chair the badminton club (through the Guangdong university alumni alliance).

In summary, I believe that proactive participation and better presentation are important and we need a more reflective demographic in our community – especially in Howick.

Diversity can come in all forms and is not always visible. Innovative and imaginative thought is important – it’s very much about the experiences, energy, innovation, and progress that you can contribute to the community to which you belong.

The post ‘We just love Howick’ appeared first on Times.