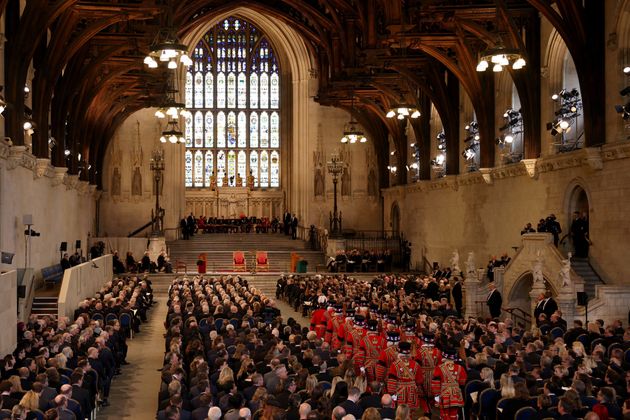 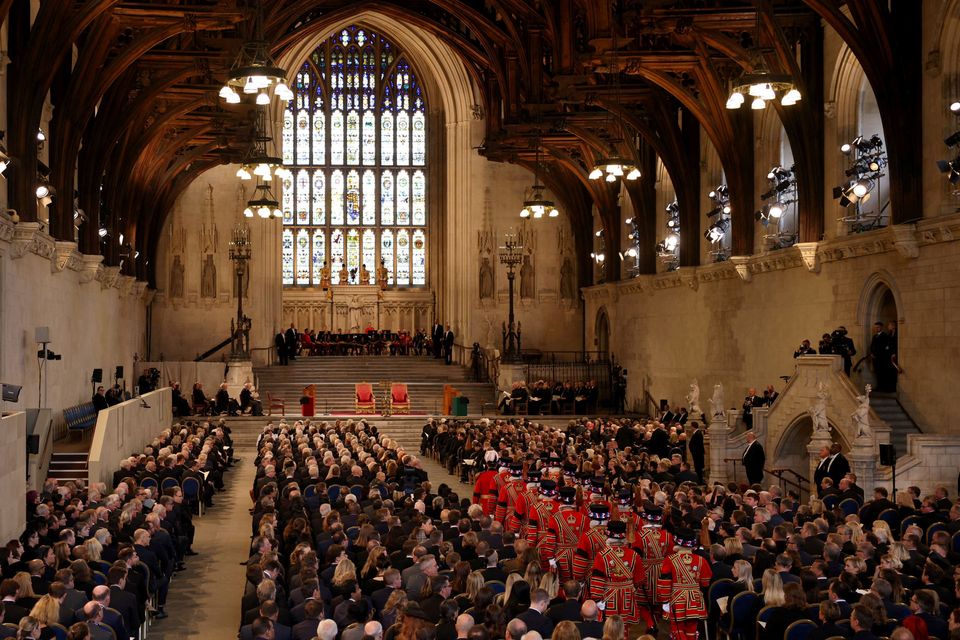 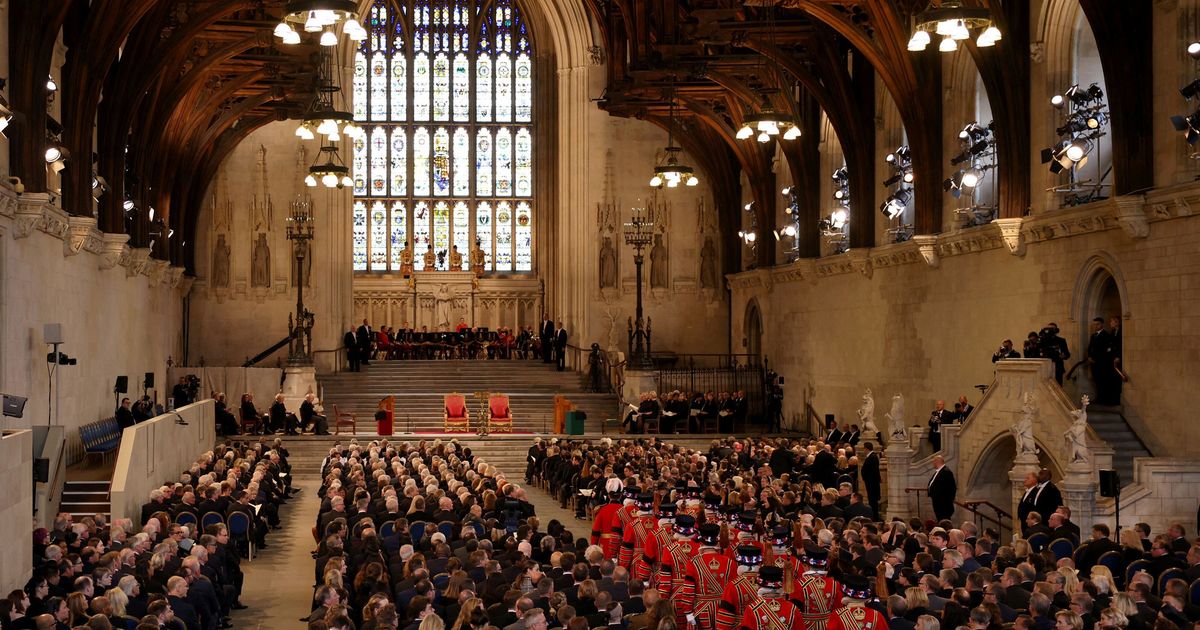 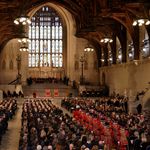 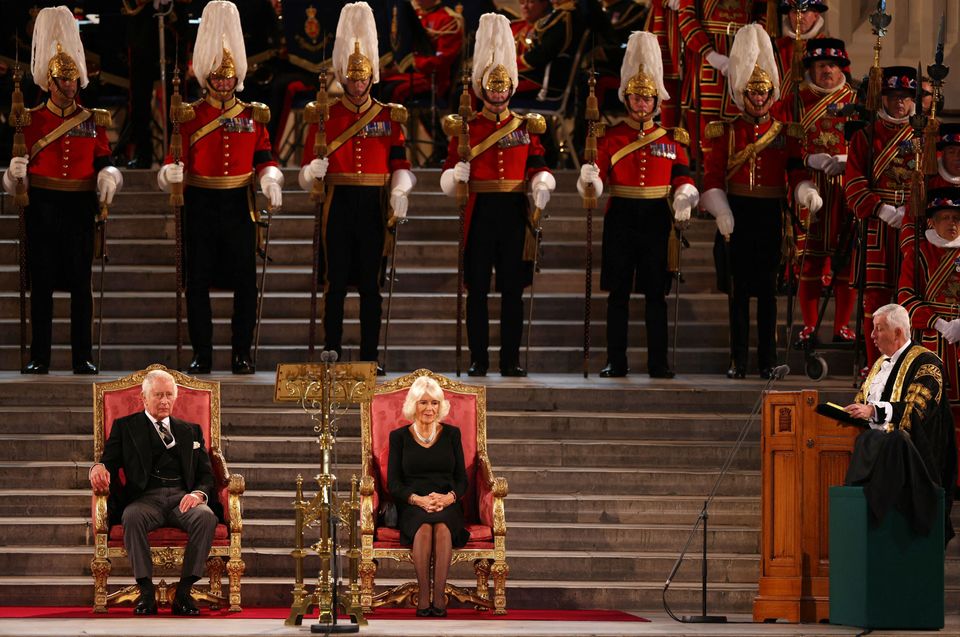 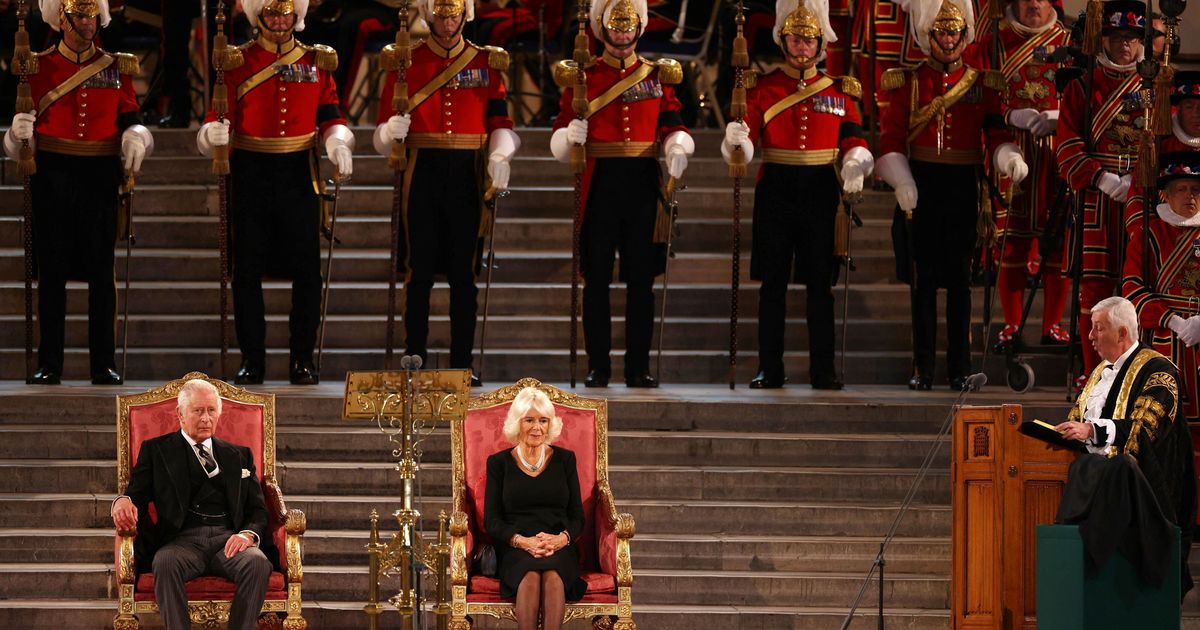 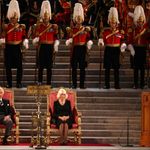 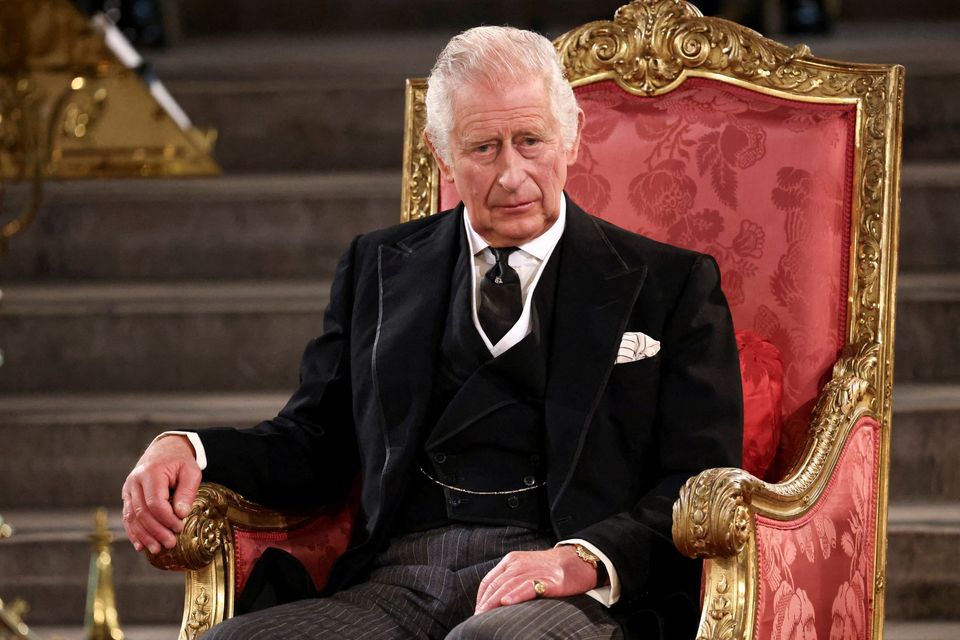 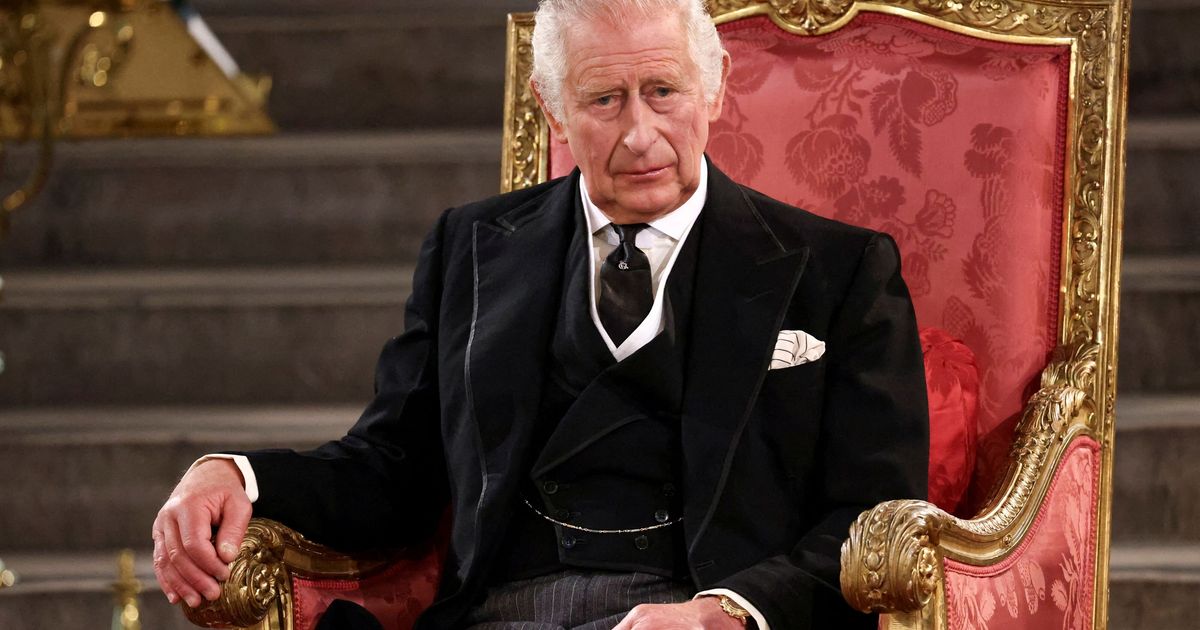 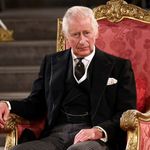 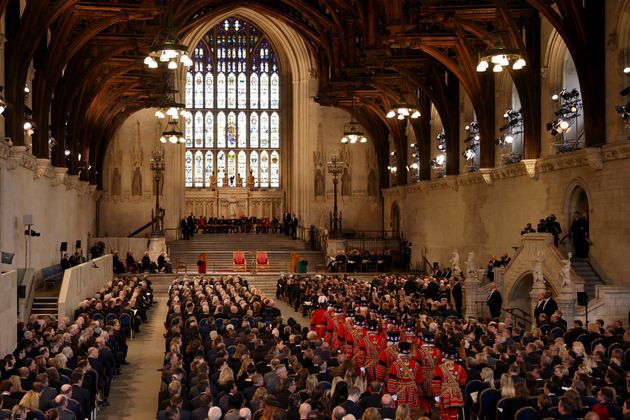 MPs, peers and other guests wait for the King and Queen Consort to arrive at Westminster Hall.

King Charles III arrived in the grand Westminster Hall this morning to address both houses of parliament following the death of the Queen last Thursday.

Around 900 MPs and peers were joined by journalists and other guests in the oldest building on the parliamentary estate to witness both the Lords Speaker and Commons Speaker address the King and to hear his reply.

Prime minister Liz Truss could be seen alongside Labour leader Keir Starmer and the SNP’s Westminster leader Ian Blackford at the ceremony in the ancient hall.

How did the King arrive in Westminster Hall?

Before King Charles’s arrival, the King’s Body Guard of the Yeoman of the Guard and the Honourable Corps of Gentleman at Arms proceeded into Westminster Hall.

At about 10.20am, the King entered Westminster Hall with the Camilla, the Duchess of Cornwall, who is now referred to as the Queen Consort. She was accompanied by the Lord Great Chamberlain, Lord Carrington.

A fanfare of trumpets sounded and the mace — the symbol of royal authority in parliament which is needed to allow the Houses to meet and pass laws — was covered by a black piece of cloth to signify that the monarch was in Parliament.

What did the Lords Speaker and Commons Speaker say?

The Lords Speaker, Lord McFall of Alcluith, was the first speaker to address the King and to pledge his loyalty to him.

He read out an address, unanimously agreed by peers, conveying “the deep sympathy felt by this House in the grief Your Majesty has sustained by the death of our late beloved Queen Your Majesty’s mother of blessed and glorious memory”.

He said the address was intended to “extend to all the royal family the deep sympathy of this house in their grief which is shared by all its members”.

And he assured the King that the example of “selfless public service, which our late sovereign displayed over her reign over 70 years, her untiring endeavours for the welfare of her peoples and her fortitude in adversity will ever be held in reverent, affectionate and grateful remembrance”.

House of Commons Speaker Lindsay Hoyle gave a personal address to express parliament’s “deep sympathy” for the death of Queen Elizabeth — a loss he said was “felt around the world”. 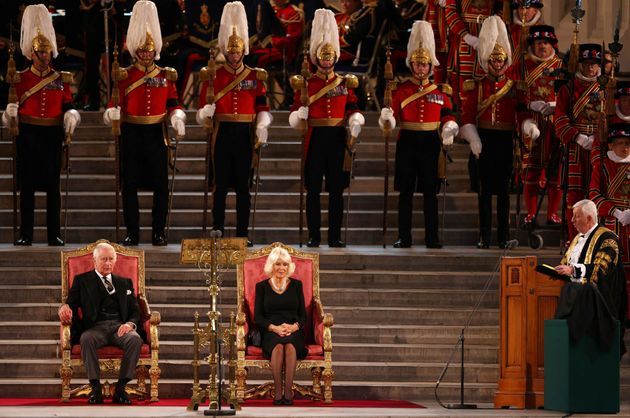 King Charles III and Camilla, Queen Consort listen as the Speaker of the Commons,Lindsay Hoyle offers his condolences following the death of Queen Elizabeth II.

He also pledged his loyalty to the new King, whom he said held the “greatest respect, the precious traditions, the freedoms, and responsibilities of our unique history and our system of parliamentary government”.

He told the King: “We know that you will bear those responsibilities which fall to you with the fortitude, dignity, demonstrated by her late Majesty.”

To laughter, he noted how revolutions had occurred in Britain alongside the continuation of the monarchy.

“It is perhaps very British to celebrate revolutions by presenting an address to Her Majesty; but those revolutions led to our constitutional freedoms, set out the foundation for a stable monarchy, which protects liberty.”

What did King Charles say? 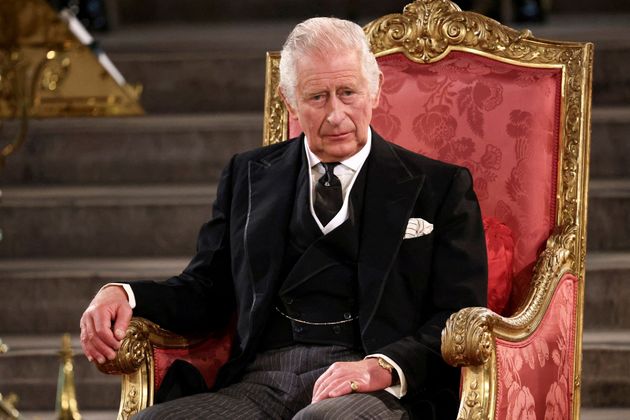 King Charles III cited Shakespeare to pay tribute to his late mother, calling her “a pattern to all princes living”.

In his address to those gathered in Westminster Hall, King Charles promised “faithfully to follow” the example of his mother.

“We gather today in remembrance of the remarkable span of the Queen’s dedicated service to her nations and peoples,” the King told the audience.

“While very young, her late Majesty pledged herself to serve her country and her people and to maintain the precious principles of constitutional government which lie at the heart of our nation.

“This vow she kept with unsurpassed devotion. She set an example of selfless duty which, with God’s help and your counsels, I am resolved faithfully to follow.”

The King said parliament was the “living and breathing instrument of our democracy” as he referenced the connections to “my darling late mother” in parliament — including the great bell of Big Ben, housed within the Elizabeth Tower and named for the Queen’s Diamond Jubilee.

In a moving speech, King Charles quoted Shakespeare in describing the late Queen as “a pattern to all princes living”.

He added: “As I stand before you today, I cannot help but feel the weight of history which surrounds us and which reminds us of the vital parliamentary traditions to which members of both Houses dedicate yourselves with such personal commitment, for the betterment of us all.”

What is the significance of Westminster Hall?

Westminster Hall is the oldest building on the parliamentary estate. It is where the Queen will lie in state later this week.

The 11th century structure has witnessed some of the most momentous occasions in British history: it was where King Charles I was brought to trial after he was charged with tyranny and treason.

It was also where the trial of Guy Fawkes and the Gunpowder plot conspirators  took place in 1606.

Following the ceremony, the King and the Queen Consort headed to RAF Northolt in Hillingdon, west London, where they travelled to Edinburgh to witness the procession of the Queen’s coffin from the Palace of Holyroodhouse to St Giles’ Cathedral.

All aboard! Stillwater man shows off vintage train collection