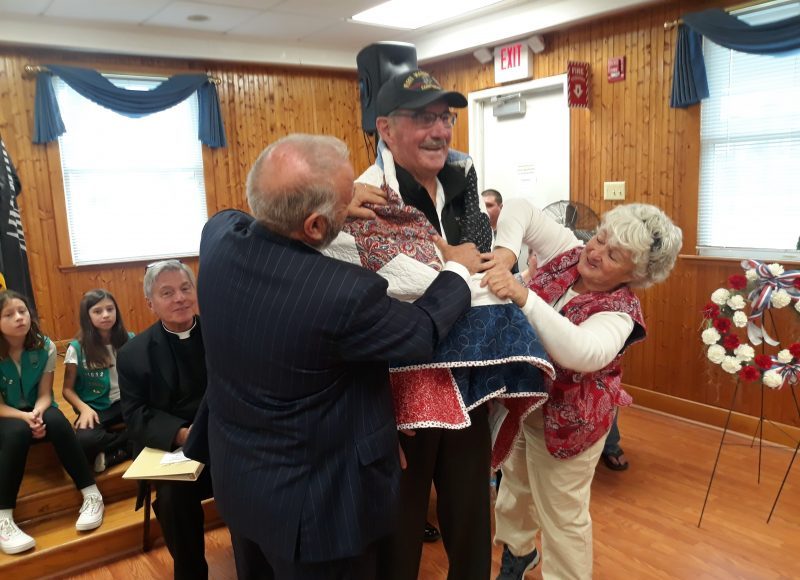 It was an emotional moment that filled Rich Lomax with pride, but also brought back memories of what he called “a brutal war.”

The 74-year-old Vietnam War veteran fought back tears as he was draped around the shoulders with a “Quilt of Valor” that symbolically comforted him from the horrors of war.

“I am very honored and humbled,” he said while addressing the audience at Sea Isle City’s Veterans Day ceremony Friday morning.

The presentation of the Quilt of Valor to a local veteran is a poignant tradition each year at the Veterans Day ceremony.

The hand-stitched quilts made by the Quilts of Valor Foundation are intended to comfort veterans who have been “touched by war.”

Mayor Leonard Desiderio and Debbie Conrad, a representative of the South Jersey Quilts of Valor Foundation, wrapped the quilt around Lomax amid applause from the audience inside the Sea Isle City Community Lodge.

“This ranks up there with the best of them,” Lomax said of the honor of receiving the quilt.

Lomax is a resident of Cape May Court House and a member of Sea Isle’s VFW Post 1963. He served as a Navy combat corpsman attached to the U.S. Marines in Vietnam in 1970.

In an interview after the ceremony, he expressed his gratitude for receiving the Quilt of Valor. At the same time, he confided that he thought about the war while the quilt was being draped around him.

Throughout the 75-minute ceremony, speakers focused on the sacrifices made by veterans of all generations and their families to preserve freedom throughout the world.

“We are reminded that because of them, we can live in peace and safety,” Desiderio said in keynote remarks.

The mayor reflected on the importance of Veterans Day nationwide, but also emphasized that Sea Isle recognizes the contributions of veterans year-round.

“We thank them every day,” he said. “We do honor veterans here in Sea Isle every day.”

“Our veterans have always served as fine examples for all of us,” Desiderio said.

Cape May County Clerk Rita Marie Rothberg recounted the story of a World War II veteran who fought in the Battle of the Bulge, in brutally cold temperatures, as an example of how veterans have sacrificed so much for their country.

“When it comes to veterans, I’m absolutely amazed by their humility and dedication to service,” Rothberg said.

Rothberg added that it was also important to credit the families of veterans for the “shared sacrifices” they have made with their loved ones.

Another speaker, Mark Lloyd, the commander of VFW Post 1963, said that throughout history, veterans have answered the call of duty to protect the country and preserve liberty.

“We sacrificed a significant slice of our lives. We didn’t do it for ourselves – we did it for you,” Lloyd, a Vietnam veteran, told the audience.

During the ceremony, a moment of silence was observed in memory of Navy veteran Bill Miller and Army veteran Tom Rock, two VFW Post 1963 members who died recently.

Lloyd’s wife, Patti, who heads the VFW Post 1963 Auxiliary, implored everyone to recognize veterans with five simple, yet significant words: “Thank you for your service.”

“One day to honor veterans. Is it enough? What do you think?” Patti Lloyd asked rhetorically while wondering whether more should be done to honor the nation’s veterans other than holding Veterans Day ceremonies.

In addition to the speeches and presentation of the Quilt of Valor, the Veterans Day ceremony included songs, prayers, the ceremonial laying of wreaths and the playing of patriotic music. Desiderio called members of the local Boy Scouts and Girl Scouts to the stage to join in the ceremony.

Bagpiper Ron Taylor serenaded the audience with “America the Beautiful” and other tunes. Taylor is a volunteer Sea Isle firefighter and a member of the Camden County Emerald Society Pipes and Drums.

The ceremony was moved inside to the Community Lodge from its usual location at Veterans Park because of a steady rain Friday morning.

Near the end of the ceremony, Sea Isle Public Works employee John Wagner presented Desiderio with an American flag that flew in a fighter jet over Afghanistan during the U.S. war against terror. Wagner, a staff sergeant and arms specialist, served in Afghanistan with the New Jersey Air National Guard’s 177th Fighter Wing.

“Needless to say, giving back to my community was always something I took pride in,” said Wagner, who was dressed in uniform.

While accepting the flag, Desiderio told Wagner, “John, we in Sea Isle are very, very proud of you.”

Desiderio promised Wagner that the flag will be displayed in a prominent place in City Hall “for all to view.”

The French Girl Way to Wear an All-Black Summer Outfit

Visit This Subterranean Town By The Seaside

The Gates-Musk Climate Movement: Much Noise. No Productive Action.