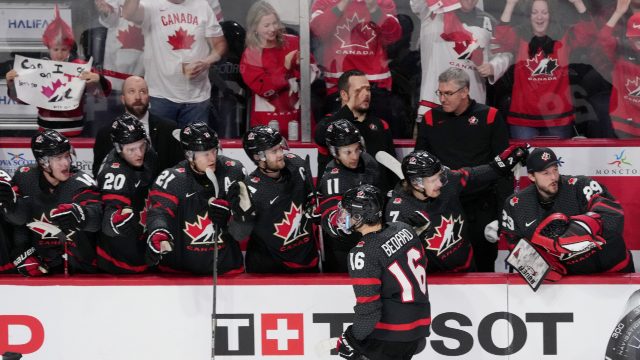 With a 4-3 OT decision in the quarterfinal, Team Canada’s World Junior team prevailed over a Slovak team that wasn’t as skilled, but were every bit as competitive. Team Slovakia didn’t win the game tonight, but they gained mountains of respect from everyone who understands and follows the game of hockey.

I want to pay respect to as many players as possible in this piece.

Here are my observations from a game I was privileged to scout:

• I’ve been scouting the WJC for years. I have not seen anyone dominate a tournament and take hold of the spotlight more than Connor Bedard. His game-winning goal will be rolling off highlight reels for all of 2023 and beyond.

• NHL Amateur scouting meetings are beginning this week across the league. Teams will convene throughout January. I can only imagine how giddy the Chicago Blackhawks, Columbus Blue Jackets, and Anaheim Ducks must feel about what they are watching unfold. They are the clubhouse leaders for the No. 1 overall pick in June as we embark on 2023.

• Slovakia goaltender Adam Gajan was sensational, facing 56 total shots. Pessimists will say Team Canada hit, at least, three posts and two crossbars, but let’s be honest — Slovakia doesn’t have a chance to win this game in overtime if not for Gajon. He ends the tournament with a 2.40 GAA and .936 save percentage.

• Gajan was not part of the initial training camp for Slovakia. He wasn’t even under consideration to get game action at the event. Talk about perseverance and performing under pressure.

It’s safe to say he is securely on the radar of NHL teams for the draft.

• Canada doesn’t win this game without contribution from Zach Dean, Nathan Gaucher, and Zack Ostapchuk. They all played with speed, tenacity, and secondary battle in the hard areas. Ostapchuk was rewarded when he scored Canada’s third goal off the rush

• Thomas Milic might have only faced 26 shots but Canada doesn’t live to play another day without the saves he makes in the third period and overtime on Servac Petrovsky and Adam Sykora. He rose to the occasion.

• Through the first five minutes of the game Team Canada didn’t have a shot on goal. By the 13-minute mark they had five and Connor Bedard had made it 1-0.

• Tonight, Dylan Guenther showed me how fast he can play the game up and down the ice. We all know he can shoot the puck, but tracking the full 200 feet is key to a long NHL career.

• I’m not sure what the final stat line is, but I know one thing – Logan Stankoven should take all key face-offs for Team Canada.

• Team Slovakia came into the game with the second-best power play (and scored on the PP tonight). They had struggled to the eight-best (or worst) penalty kill in the preliminary round. They did a fantastic job on the PK tonight, though, allowing only one goal.

• My pre-game notes included one that Team Slovakia captain Simon Nemac would likely play over 30 minutes. He skated 25 minutes and scored a power-play goal. He spent six minutes in the penalty box, but otherwise he would have definitely approached 30.

• Not to be outdone, Olen Zellweger was an absolute workhorse for Team Canada. He ended the game with an incredible 30:07 of ice time. The transitional defender played with solid detail on the defensive side and battled shift in and shift out.

• Adam Sykora emptied the tank for Team Slovakia tonight. The New York Rangers pick (63rd overall in 2022) is a tenacious competitor with some secondary scoring upside for the NHL game. He was used in all situations and was noticeable from the start.

Here are other draft eligible players from the game, along with my scouting observations:

Fantilli started the game in a middle-six role and saw some spot duty on the second power play unit. I have no issues with the way he competed tonight. He played to his identity when his number was called. He’s a big, strong, quick and fast forward who will produce his share of offence at the pro level. His ice time diminished as the game went along, ending with 9:39 TOI spread over 13 shifts.

The 6-foot-2, 198-pound right shot defenceman logged a ton of minutes for Slovakia. He was used in all situations (second PP unit) and was up to task in the defensive zone. There wasn’t a single easy matchup for Strbak in this game. When captain Nemec was in the penalty box Strbak was deployed in his place on the first penalty kill unit. He’s calm under pressure, pushes back physically, and provides some secondary offence. Strbak ended the game with 22:12 in ice time and over 35 shifts. His draft ranking has had him anywhere from the mid-second round to the early third round. I’m betting he goes between 35-40 after this display.

Dvorsky’s line was consistently matched up against the Bedard line. It was a huge ask for the group, but they were mostly up to the task. Dvorsky worked hard on and off the play. He was consistently involved and didn’t cut any corners. He won some key face-offs and created some chances off the half wall and skating below the goal line behind Canada’s net. He ended the game with 17:53 TOI over 26 shifts. His draft stock will be on the rise as well after this showing.

Natalie Mariduena Shimmers in a Silver Halter Dress on the Red...