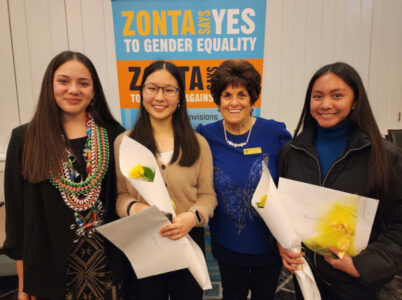 The Zonta Club of East Auckland has recognised women and girls in the community at the annual awards.

Award winners were joined at the Howick Club on October 4 by family members and friends.

The Year Twelve Female Empowerment Award was taken by Katie-Rose Pemberton of Howick College and Bianca Lin of Macleans College for their service and leadership.

Other awards were Presidents’ Scholarship for a woman entering second chance education won by Charlotte Vake.

The Founders Day Award was awarded to Marin Burgess for continuous service to the community and Howick heritage.

The Zonta Club was delighted to welcome well-known Howick identity Val Lott as its newest member.

The post Zonta recognises women in the community appeared first on Times.

A ‘relieved’ Emma Raducanu is back swinging freely ahead of US...

NOVEL MART ARE MAKING MERCH FOR OUR FAVE FOOD AND DRINK