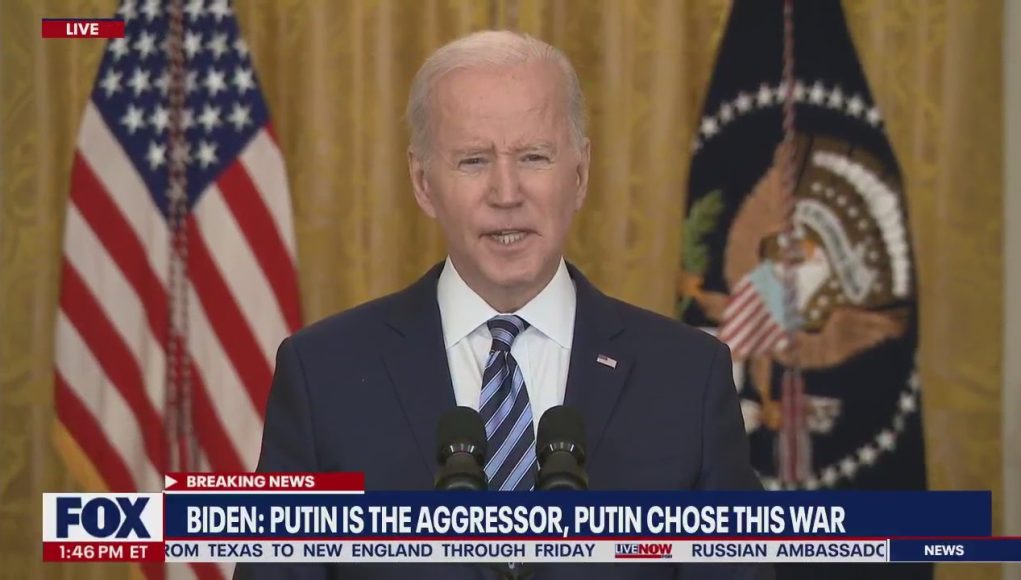 Biden on Russia-Ukraine invasion: ‘Putin is the aggressor’ | LiveNOW from FOX President Joe Biden spoke for the first time since the Russia invasion of Ukraine. Biden highlighted sanctions against Russia and said direct sanctions of Russian President Vladimir Putin are “still on the table.”

Biden decried the Kremlin’s military aggression during an address from the White House, saying Russian President Vladimir Putin “chose this war” and that his country will bear the consequences of his actions.

Ukraine’s government has reported mounting casualties as Russian forces attack from the east, north and south.

The sanctions are aimed at Russian banks, oligarchs and high-tech sectors in hopes of crippling Russia’s financial system and Putin’s inner circle.

Biden added that strict export controls aiming to starve Russia’s industries and military would be imposed, cutting the Kremlin off from U.S. semiconductors and other high-tech products.

Putin ignored global condemnation and cascading new sanctions as he unleashed the largest ground war in Europe in decades, and chillingly referred to his country’s nuclear arsenal. He threatened any foreign country trying to interfere with “consequences you have never seen.”

Ukrainian officials said their forces were battling Russians on multiple fronts and had lost control of the decommissioned Chernobyl nuclear power plant, the scene of the world’s worst nuclear disaster.

“Russia has embarked on a path of evil, but Ukraine is defending itself and won’t give up its freedom,” Ukrainian President Volodymyr Zelenskyy tweeted.

Later, he offered Russia an end to the hostilities.

“It wasn’t Ukraine that chose the path of war, but Ukraine is offering to go back to the path of peace,” he said.

The Associated Press contributed to this story. It was reported from Los Angeles.

Are Music Festival Lineups Getting Worse?

Obamacare is gradually becoming a fact of American life