Teachbytes
Home News San Antonio is sounding the alarm as Title 42 is set to... 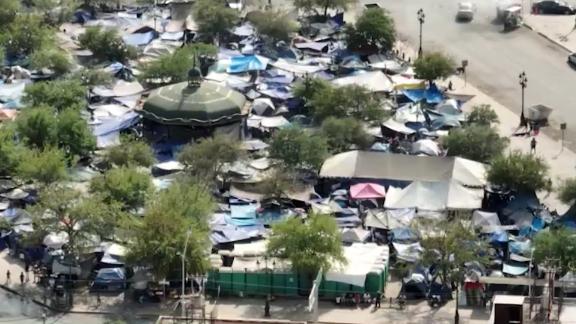 Katie Myers has a smile for everyone as she walks around Travis Park in downtown San Antonio, greeting migrants who have just been dropped off in the city by US immigration authorities.

Myers is a volunteer with the Interfaith Welcome Coalition, a non-profit that helps migrants traveling through San Antonio with the basics, like buying bus tickets and making phone calls.

But Myers says there’s a new phenomenon that complicates this current surge.

Since mid-March, Myers says, on average, immigration officials are leaving 150 to 200 migrants at the bus station every day and 300 to 500 at the airport. The sudden spike took volunteers like Myers by surprise.

In prior surges, most migrants only spent a few hours in San Antonio before traveling north, Myers said. But during a period last month, 20 to 25 migrants each day needed to stay overnight.

“It’s not just simply a matter of arranging for them to get a ticket,” Myers said. “You have to figure out whether or not there’s a place for them to live.”

There are now two groups of migrants arriving in San Antonio: those with the plans and means to travel onwards, and those without, Myers said. And the numbers keep rising.

At the border, US officials are bracing for an increase in migrant arrivals when the public health border policy known as Title 42 is lifted next month. The policy has allowed officials to swiftly return migrants to Mexico or their native countries during the pandemic.

Some Texas leaders have said local services available to migrants will be overwhelmed when Title 42 ends — but San Antonio officials say the situation is already causing alarm.

An ‘unsustainable increase’ in migrants

In San Antonio, some 150 miles from the Rio Grande, white buses and vans, with no signage or logos, are already dropping off hundreds of migrants at the downtown bus station and the airport every day.

In one hand, the migrants carry a manila envelope with the forms provided to them by US immigration officials. The other usually holds a small plastic bag with all their belongings and a US government issued cell phone — a device migrants use to verify their whereabouts and the Biden administration’s alternative to detention. On their feet are lace-less shoes, as migrants must give up their laces during immigration processing.

The city is seeing an “unsustainable increase,” in migrants, according to San Antonio Mayor Ron Nirenberg. The rising numbers prompted Nirenberg to write a letter to US Department of Homeland Security Secretary Alejandro Mayorkas.

Nirenberg provided a copy of the letter, dated March 31, that states from March 19 to the 29, an average of 628 people were staying in shelters, sleeping at the airport or at the city park.

“I respectfully request immediate action from the Department of Homeland Security to increase funding for humanitarian infrastructure and resources,” Nirenberg wrote. Since then, city officials have been in continuous dialogue with US Customs and Border Protection and FEMA, according to his office.

DHS said it has “been in regular contact with the mayor of San Antonio and other elected officials, local leaders, and non-governmental organizations as part of a whole-of-government effort to manage and plan for any increase of encounters along our Southwest border.”

San Antonio city officials have warned if the unpredictable surges continue, and Title 42 lifts, the city’s ability to meet the humanitarian need could be limited, according to an April 4 memo.

A coalition of non-profit organizations has been providing hotels to migrant women traveling with children, Myers said, but this still leaves many migrant men without places to stay. But Myers and other volunteers are taking the surge in stride — they’re used to making it work with funds from generous donors and the sweat equity of volunteers.

Across the street from Travis Park, Rev. Gavin Rogers, a pastor from a church that bears the same name as the park, warms up a rice and seafood dish to welcome migrants to his newly opened migrant shelter.

“We opened up our shelter to relieve those who are trying to get through San Antonio to their host cities and are just waiting on proper transportation,” says Rogers.

Located in the basement of his church, the shelter can host up to 150 people per night. A makeshift diner, made up of tables and chairs, fills the center of the small space. Green cots line the walls.

Meanwhile at the park, volunteers with the Interfaith Welcome Coalition, like Myers, set up an informal consultation desk under a tree.

One by one, people approach the table in an orderly fashion, asking for their names to be added to the list of guests Rogers will host. The line grows long; a sign word of the shelter has spread amongst the recently arrived migrants.

“A few nights ago, we were at 120, a few days ago we were at like 44. So, it really varies depending on if hotels open. A lot of those hotels will give preference to women and children and families,” says Rogers.

As a result, when Rogers opens the doors to his church, mostly men walk in. The stress and weight of the day’s wait can be seen clearly on their faces. Most have spent their day at the nearby park with no access to money, food or a public restroom. According to Rogers, the migrants spend on average one or two nights in San Antonio before moving on to other cities.

Jessie Amaya, a migrant from Venezuela was an exception. He told he had slept at Roger’s church for over 20 days. Amaya has no family or friends in the United States. He left his home country for fear of political prosecution and hopes to call San Antonio home.

US Rep. Henry Cuellar, a Democrat representing San Antonio, says he worries about the surge of migrants expected next month when Title 42 lifts.

He’s so worried, in fact, he’s joining a growing number of Democrats up for re-election who are opposing the Biden administration’s decision to end the policy next month.

“When you start hearing San Antonio officials talking like the border officials, saying ‘We need help, we need help,’…then we know that the impact has rippled up 150 miles or further,” Cuellar said.

Of the more than 220,000 migrant encounters reported by CBP in March, nearly 50%, were expelled under Title 42. But come next month, border officials will revert to pre-pandemic protocols and process all migrants they encounter. The Biden administration also says it will increase the number of federal agents on the southern border — though Cuellar argues that still places the burden of the humanitarian crisis in the hands of municipalities and non-profits.

When he asked the White House for a plan to address the post-Title 42 surge, Cuellar says he wasn’t satisfied with the answer.

“They said we’re going to notify the not-for-profits that more people are coming,” Cuellar said. “That’s not a plan. That’s just a notification.”

At Travis Park, Myers continues her work, floating from one migrant to the next, smiling as she answers questions and reassures people. One man approaches her, worried about not having a place to stay for the night.

“Just wait here,” Myers tells him, and then explains his name will be added to the list of migrants staying at the reverend’s shelter that night.

Myers, who started volunteering with migrants in 2018, helps at the park three days a week. She says she witnesses acts of kindness all the time — recalling when a migrant recently handed her their last $3 to “pay it forward.”

While the solution to immigration is complicated, Myers says, she has found something easy she can do to contribute: “Treat them with kindness and dignity and respect.”

Ron DeSantis has taken Trump’s playbook — and made it much...

The US is in ‘transition phase’ of pandemic, Fauci says

A week of history and rabid partisanship encapsulates an extreme Washington...