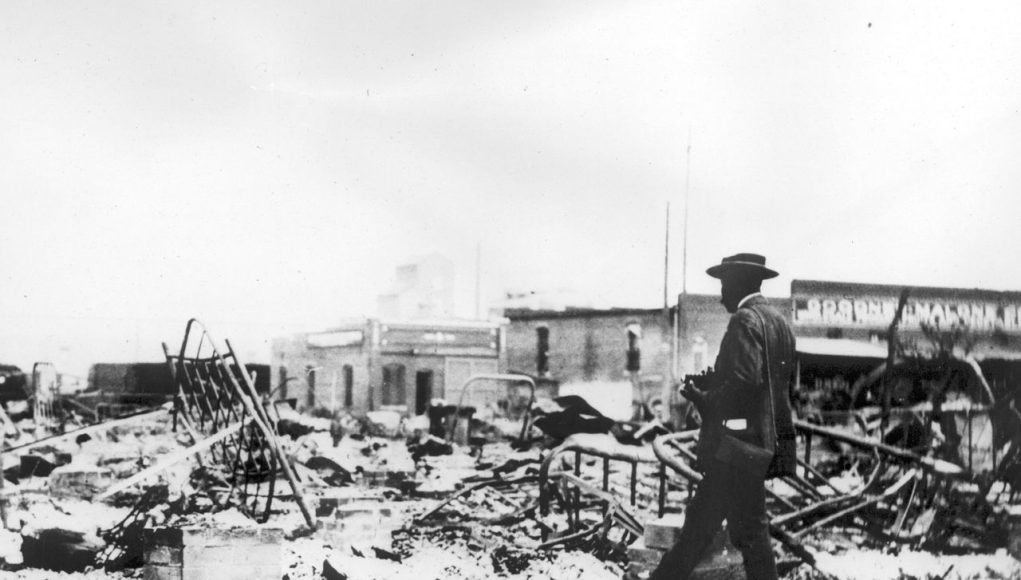 The plaintiffs in a lawsuit seeking reparations for the 1921 Tulsa Race Massacre celebrated a judge’s ruling on Monday when she allowed their case to move forward after defendants sought a motion to dismiss the case.

Judge Caroline Wall said the motion to dismiss was “granted in part” and “denied in part,” which essentially allows the case to proceed but it’s unclear what will happen next, including details on a potential trial, according to Michael Swartz, one of the attorneys for the plaintiffs.

The plaintiffs’ attorneys pleaded Monday afternoon for the judge to allow the case to move forward so the survivors and descendants of victims from the massacre could have their day in court, potentially their last chance to get some semblance of justice.

A packed courtroom in Tulsa erupted in cheers and applause at the judge’s ruling, including the three remaining survivors who are all over 100 years old and were in the courtroom for the hours-long hearing.

“I’ve never seen nothing like this happen,” said Hughes Van Ellis, a 101-year-old survivor of the massacre who told he never lost hope.

The lawsuit was filed in March 2021 and looks to not only set the record straight on what took place between May 31 and June 1, 1921, but also create a special fund for survivors and descendants of the massacre that left at least 300 Black people dead and the once-booming neighborhood of Greenwood destroyed.

On top of that, attorneys for the plaintiffs are racing against the clock. Three of their clients are more than 100 years old; including the 101-year-old Ellis as well as Viola Fletcher and Lessie Benningfield Randle who are both 107.

Damario Solomon-Simmons, an attorney for the plaintiffs, told on Monday he was involved in earlier litigation for the massacre in the early 2000s with Charles J. Ogletree and Johnnie Cochran. Today’s victory, he said, followed a long string of defeats.

“When you work on something for 20-plus years, you have defeat after defeat … you have client after client die. To know I have three living survivors that are here with me right now feel this partial victory, it means everything,” Solomon-Simmons said.

Judge Wall’s decision Monday on the case, which has been 100 years in the making, means America could be held accountable for a previous injustice and could lay the groundwork for similar cases in the future, Solomon-Simmons said.

“It shows a precedent and model of how you can organize a community, how you can organize your colleagues and partners throughout the nation,” he said. “This victory we’ve received is because of so many people working together from across this nation and building coalitions.”

Walking into the courtroom to a cheering crowd Monday, Solomon-Simmons pleaded the case to move this trial forward.

“They’ve waited 300-plus years to have their day in court,” Solomon-Simmons said of the three survivors. He argued the main point of this case is undoing the harm done by the defendants, arguing there is no time limit on something that is having a continued effect.

“Injustice plus time does not equal justice,” Simmons said.

The lawsuit names 11 plaintiffs, including survivors and relatives of survivors. Seven total defendants are named, including the city of Tulsa, Oklahoma Military Department and the Tulsa Development Authority.

Six months after the lawsuit was initially filed, some defendants in the case, including the Board of County Commissioners and Tulsa Metropolitan Area Planning Commission, filed motions to dismiss. The defendants’ oppositions included arguments that the case lacks standing because some plaintiffs have not proven they suffered concrete personal injury and that their alleged injuries could not be remedied by the court. A hearing was held in September, but no decision was made at the time.

A judge gave the plaintiffs until January 31 to present new arguments and gave the defendants until March to respond, Solomon-Simmons said.

“We asked her for another hearing day because mother (Viola) Fletcher turns 108 on May 10, and we asked Judge Wall and … we said, ‘Look, this issue needs to be resolved before this lady turns 108 years old.’ And that’s why she granted that hearing,” he said.

The lawsuit is also looking to officially declare that the actions of that day and the century that followed “created a public nuisance” for the plaintiffs and their descendants as defined by Oklahoma law.

The next steps after Monday’s hearing would be the discovery stage or the gathering of more evidence.

John Tucker, who is representing the Tulsa Chamber, argued Monday that a charge of public nuisance can’t address societal ills, and he quoted extensively from the November ruling where the Oklahoma Supreme Court reversed a district court decision that ordered Johnson & Johnson to pay $65 million to the state for its role in the opioid crisis.

“We hold that the district court’s expansion of public nuisance law went too far,” Oklahoma Supreme Court Justice James Winchester wrote in his opinion at the time, adding the state’s public nuisance cannot be extended to the opioid pandemic.

Tucker further argued it’s a matter to be addressed by other branches of government, not the courts, and the judge would be overstepping the legislature’s mandate by allowing this case to go to trial.

There have been efforts in recent years to raise awareness about the massacre.

The 2018 news that victims’ bodies might have been found, along with plot lines from two popular TV shows — HBO’s “Lovecraft Country” and “Watchmen” — helped to invigorate interest in this dark period of American history.

Many of the details about what happened that spring have been lost to time, though.

What is known is that Tulsa at the time had something most cities did not: The Greenwood District was a thriving Black hub of commerce, home to multiple millionaires and about 300 Black-owned businesses. It is colloquially known as Black Wall Street.

The events leading up to the massacre began on May 30, 1921, when Dick Rowland, a 19-year-old Black shoe shiner, ran from an elevator in a downtown building after the elevator’s teen operator let out a scream. Rumors of a rape then circulated, Rowland was arrested, and White Tulsans formed a lynch mob.

The mob laid waste to about 35 blocks within 16 hours, arresting thousands of Black residents, while robbing, beating and killing others. Historic photos show entire blocks gutted by flame and Black people lying in the street.

Exacerbating matters were insurance companies that denied many claims for what today would be tens of millions of dollars in property damage, including the destruction of two Black hospitals and 1,256 residences, according to the Greenwood Cultural Center.

“There is still no hospital in north Tulsa today. So that’s 101 years that that hospital has never been rebuilt,” Solfanelli said. “When you think about the generational wealth that was lost when Greenwood was lost, then I think people can step back and say, ‘Wait a minute, imagine if that happened to my great-grandparents.'”

Why conventional wisdom giving China the military edge over India may...

For over 60 years, the identity of a girl whose body...

‘I’m sure it is fair,’ Zelensky urges EU to make Ukraine...