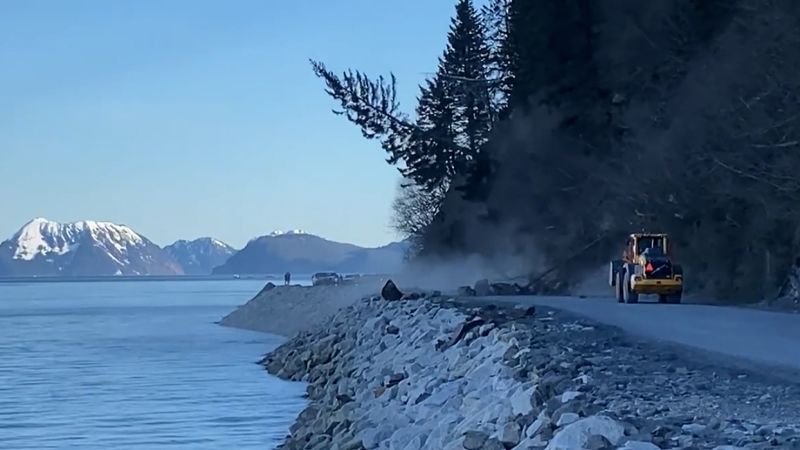 An area outside the Lowell Point community near Seward, Alaska, was still unstable Sunday, following a Saturday landslide which blocked access to the primary road connecting the resort area and the city of Seward.

Brenda Ballou, a spokesperson for the city, a few hundred people live in Lowell Point, an unincorporated, heavily-visited tourist area on the Kenai Peninsula south of Anchorage.

Marissa Beck, who owns a rental property in Seward, there are many cabins and rental houses in the area, and guests are now stuck in town or cannot get to their rentals. Many people are taking water taxis or their own boats to get to the other side of the slide.

No one was hurt when the slide occurred, Seward City Manager Janette Bower said in a Facebook post Saturday, and Ballou confirmed.

Nathaniel Caole was headed to walk his dogs on Saturday evening when he noticed a commotion on Lowell Road and pulled off to the side of the road to see what was happening. He noticed a boulder was blocking a part of the road, and cops were stopping traffic from passing by.

“Rocks would fall continuously and once in a while some bigger rubble would come down, but there were no signs that the slide was going to be that extensive.” Caole said.

“When the slide first started I noticed the first tree came down and then quickly after that I could see all the trees upwards falling in unison,” Caole said.

It’s unclear what triggered the landslide, but Lowell Road frequently has falling rocks and avalanches, according to Beck.

A local company is mobilizing to begin recovery efforts once geologists deem the area to be stable. The state is sending geologists with drone equipment to assist in assessment efforts, Ballou said.

According to Ballou, no utility functions were damaged in the landslide and communication remains open with Lowell Point.

One person killed and 28 wounded — including children — in...

Blinken says Russia’s ‘playbook’ for an invasion of Ukraine is moving...

A middle-aged woman is the third patient to be potentially cured...