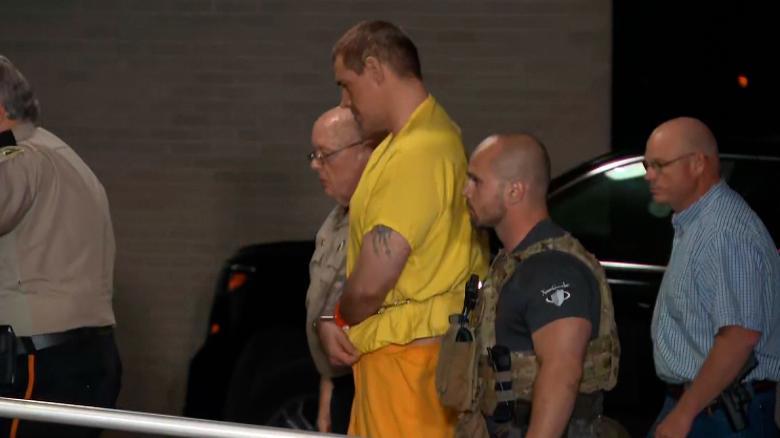 Escaped inmate Casey White was brought back to Alabama late Tuesday night for his first court appearance since he was captured following a car chase in Evansville, Indiana, Monday.

He returned without the corrections official he fled with, Vicky White, who authorities preliminarily believe shot herself in the head following the chase. She died from her injuries, authorities said.

At the arraignment, Judge Ben Graves informed White he will be charged with escape in the first degree, in addition to capital murder charges he was already facing related to the death of Connie Ridgeway.

The inmate was escorted to the courthouse in a caravan of armored vehicles and arrived shortly before 11 p.m. He entered the courthouse in handcuffs and with shackles around his ankles and briefly met with his attorney before entering the courtroom.

During the hearing, White listened intently with his eyes locked on the judge as he explained the charges. White appeared to be tired and sniffled more than once throughout the 10-minute hearing.

Immediately following the hearing, White exited the courthouse and glanced at the media cameras and the crowd of bystanders who had gathered, but he did not say anything. He was being transferred to the William E. Donaldson Correctional Facility in Bessemer, Alabama, a little more 100 miles from Lauderdale County.

Casey White and Vicky White were captured Monday after a car chase, which ended when authorities forced the car Casey White was driving to wreck in a ditch, the US Marshals Service has said.

Vicky White was transported to the hospital and later died from her injuries. Authorities preliminarily believe she shot herself after the car crashed.

Newly released police dash camera and body-worn camera video shows the moments after the car chase ended when Casey White was arrested and officers attempted to pull Vicky White, who was injured, from the car that had rolled into a ditch following a crash with authorities.

In the video, several officers can be seen surrounding Casey White, who is pinned to the ground next to the car. The fugitive is then taken into custody and led away from the wrecked car.

Authorities were not immediately able to pull Vicky White from the car because she appeared to still have a gun in her hand, according to officers seen in the body camera video, who also noted she appeared to be breathing.

After an officer reached in to pull the gun from her hand, they worked to pull her from the sunroof opening in the car, the video shows.

The crash ended a frantic 11-day manhunt that spanned multiple states and elicited hundreds of tips, including one that ultimately led authorities to their capture.

On April 29, the corrections officer checked the inmate out of jail and the pair fled together. Officials believe the two had a romantic relationship and previously said that they are not related.

The veteran officer used her years of experience to plan and execute the escape, officials have said.

Vicky White “was basically the mastermind behind the whole plan,” Lauderdale County Sheriff Rick Singleton said Tuesday. “Casey White didn’t escape from the facility; he was basically just let out.”

Pair was prepared to hide for much longer

Vicky White and Casey White are believed to have been in Evansville since at least May 2, according to Evansville Police Chief Billy Bolin.

They were staying in motel room that was paid for for 14 days, Vanderburgh County Sheriff Dave Wedding has said. Authorities are investigating whether a third person may have helped book the room for them, he tells. They initially tried to book a room themselves, he said, but could not because she didn’t have any identification.

The capture ultimately came after a Cadillac the pair was suspected to be driving was spotted in the motel’s parking lot, Wedding said.

As officers were conducting surveillance on the motel, Vicky White and Casey White exited, got into the Cadillac and drove away, US Marshal Marty Keely said. Officers followed them and a car chase ensued, ending when authorities forced him to wreck in a ditch.

Casey White reportedly told authorities to help “his wife” who he said had shot herself in the head, according to Keely, who noted that Casey White and Vicky White were not married to investigators’ knowledge.

Authorities believe Vicky White may have shot herself once the vehicle crashed, according to Wedding.

“Any one of these weapons could have been used to ambush our officers while they were attempting to capture a murder suspect” he said.

A trial for Casey White, who is facing capital murder charges for the 2015 death of Connie Ridgeway, is set to begin in June, though his attorneys could request more time. White allegedly confessed to killing the woman, but later pleaded not guilty, authorities have said.

Casey White was brought to the Lauderdale County Detention Center, where Vicky White worked, in February to attend court hearings in the case.

One person killed and 28 wounded — including children — in...

Soldier dies, 2 others hurt in military training exercise in Washington...