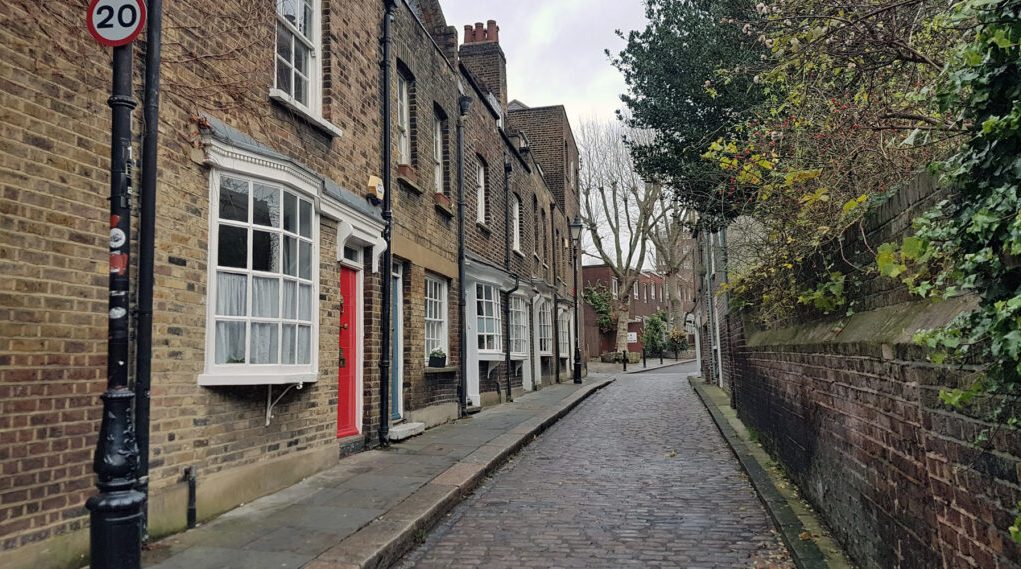 This is a charming little passageway in north London that is famous for the row of Georgian houses that line it with their bow windows and cobbled street. OK, it’s arguable if this is an alley, but it’s short and narrow — and much more important to me, it’s charming. 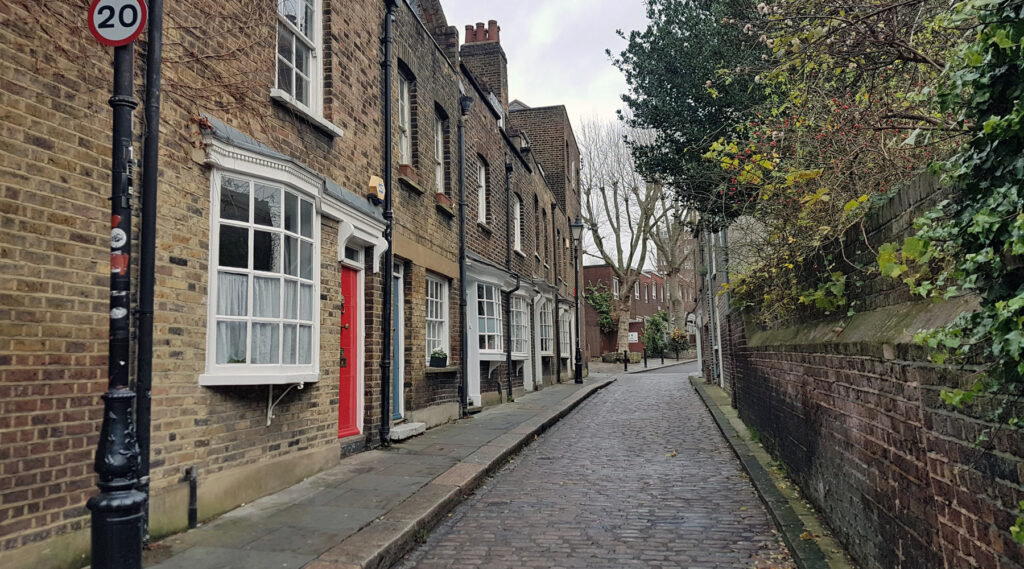 This wasn’t originally a residential street, and with the exception of the two corner houses, this was a street lined with shops. The bow-fronted windows that survive were the original shop fronts. The north side of the street survives as originally built, and when built faced onto still empty fields. The southern side was built about a century later, and is a row of former workshops.

One reference suggests that the street is named after the hamlet Little Green that used to be in the area before it was developed, and that seems supported by a John Rqoque map of 1746 that shows the main road as Green Street.

The street was described in the 1938 Survey of London as: “Quite the most interesting survival of the work of the late 18th-century after Grove Terrace and is noticeable for its varied bow-windows.”

Which seems fair to me.

The tunnel exists is because just to the west of the street are two railways — one on a bridge over the main road, which is part of the London Overground between Gospel Oak and Barking Riverside, but also a short tunnel that links the Overground with the mainline out of Euston station. 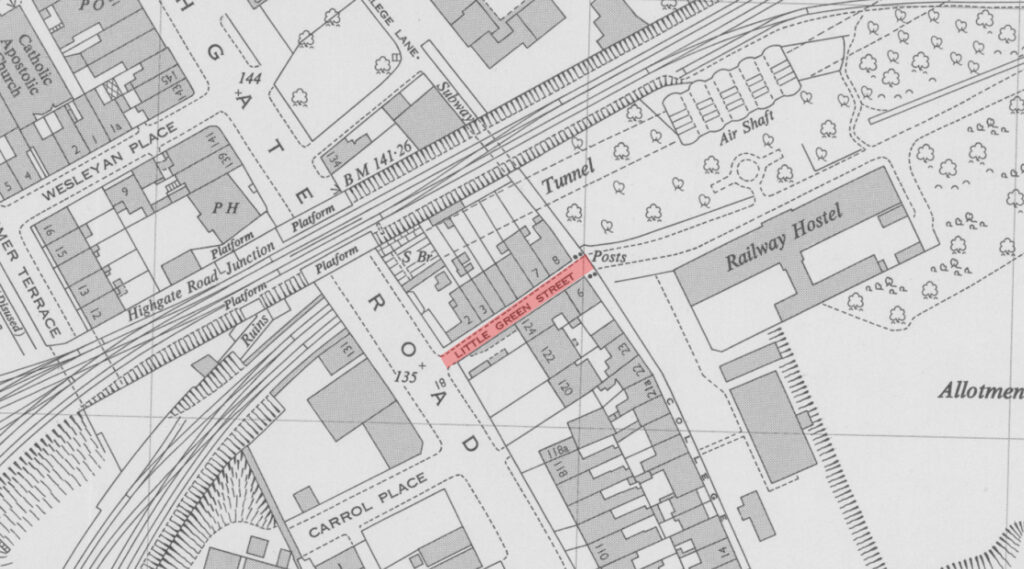 At one time, there was a station here as well – or in keeping with confusing railway history, two stations with the same name.

Highgate Road station first opened on the railway bridge in 1868, but in 1900, another station opened in the railway cutting next to it. Both stations closed within a few years of each other.

The High Level station was constructed by the Tottenham and Hampstead Junction Railway, a commercial failure of a railway that was taken over by the Midland Railway in 1870, and they dug the connecting tunnel to link up with their mainline into Euston. The tunnel still exists, and although not part of any normal commuter traffic, it’s used on occasions by the London Overground when they need it for diversions, and as a convenient link for freight and heritage railways.

It’s speculative, but had the railway been more successful, then this would be a major junction with a much larger station built, and Little Green Street’s Georgian cottages would have long since been demolished and replaced with larger houses or flats.

As it is, they survived thanks to a lack of demand for high-density housing next to a decommissioned railway station. 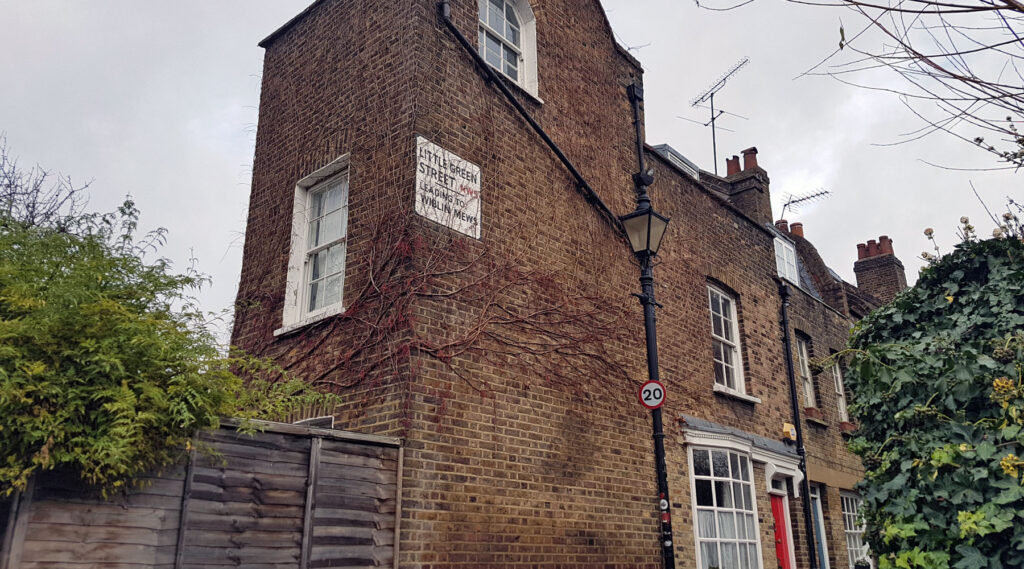 The street gained considerable publicity 15 years ago when a plot of land nearby was to be redeveloped, and access was granted to construction vehicles to use the narrow cobbled street. This led to a lot of protests about noise and the risk of damage to the heritage buildings.

The site was the former British Rail staff association clubhouse, which in the way railways often were at the time, was built in 1950 on former allotments as a “temporary” building. Fifty years later it was still there. It had however since closed down, and the developer proposed building 20 flats on the site. Permission was initially refused but approved on appeal after the third attempt.

One of the small compensations for Little Green Street is that the developer agreed to repave the road, which was a mix of cobbles (setts) and tarmac, and is now a more appealing fully cobbled street more fitting for the heritage of the houses. 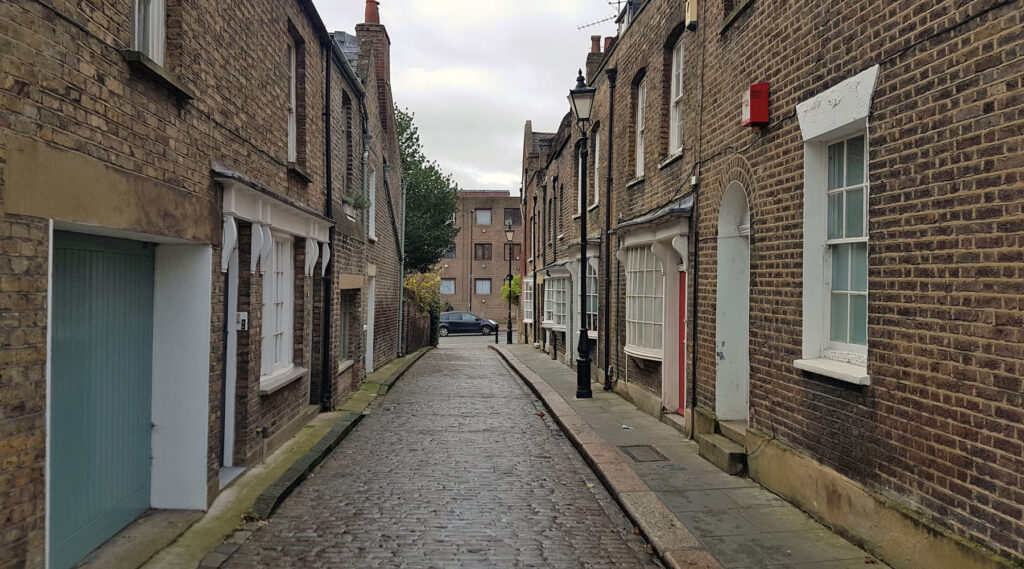 And yes, this is the street where the Kinks filmed ‘Dead End Street‘ in 1965.

Ex-Roma star Radja Nainggolan banned indefinitely by Antwerp after he is...