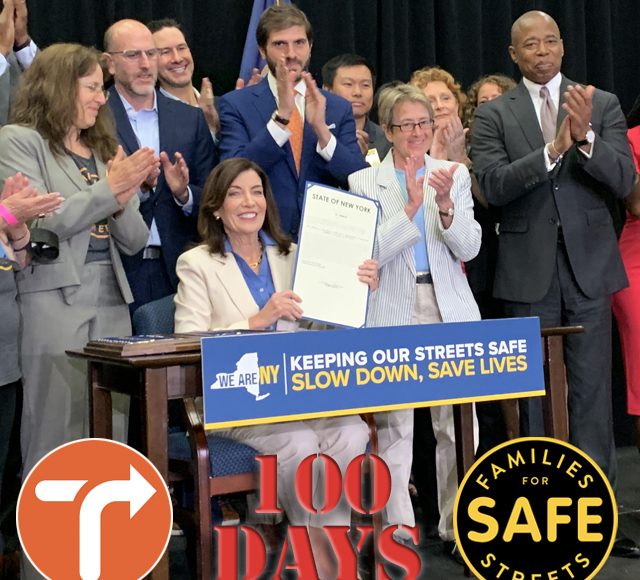 What do we want? EVERYTHING! When do we want it? NOW!

That’s basically the upshot of how we in the livable streets movement are treating the upcoming legislative session in Albany, with a fresh governor sworn in for a full, four-year term.

This morning, Transportation Alternatives put out a first salvo in the form of a lengthy position paper outlining the group’s ambitious agenda to reclaim streets from cars, increase access to open space, build more affordable housing, improve transit and get more people biking on life-saving infrastructure. You can read TA’s doorstop of an agenda, which is inaptly named, “Seven Steps for New York State’s Leaders to Transform New York City’s Streets,” by clicking here.

We’re not complaining. It’s nice to have our Christmas wishes — old, new, borrowed and … green — all in one place. The problem? We eager recruits in the war on cars — like soldiers on the ground — need marching orders. We can’t storm Albany if we’re still fighting brush fires in the City Council. And we can’t levitate Pete Buttigieg’s office, if we’re still struggling to prevent Community Board 7 from exiling members who happen to show up at meetings wearing a tie with a bike on it.

Every idea in the TA document is a good one, but we need to focus, or we’ll waste ammo fighting the wrong battle. The enemy is well funded and backed by a hundred years of car culture. It loves to tire us out.

So for help, we called up Transportation Alternatives Executive Director Danny Harris yesterday and he set us straight on what he and his group — and the rest of you activists — should be focusing on in the first 100 days of Gov. Hochul’s term. Harris’s targets:

After those are accomplished in the first 100 days, we can all go back to fighting the 100 Years War.

Unsettled Lives in a Troubled World