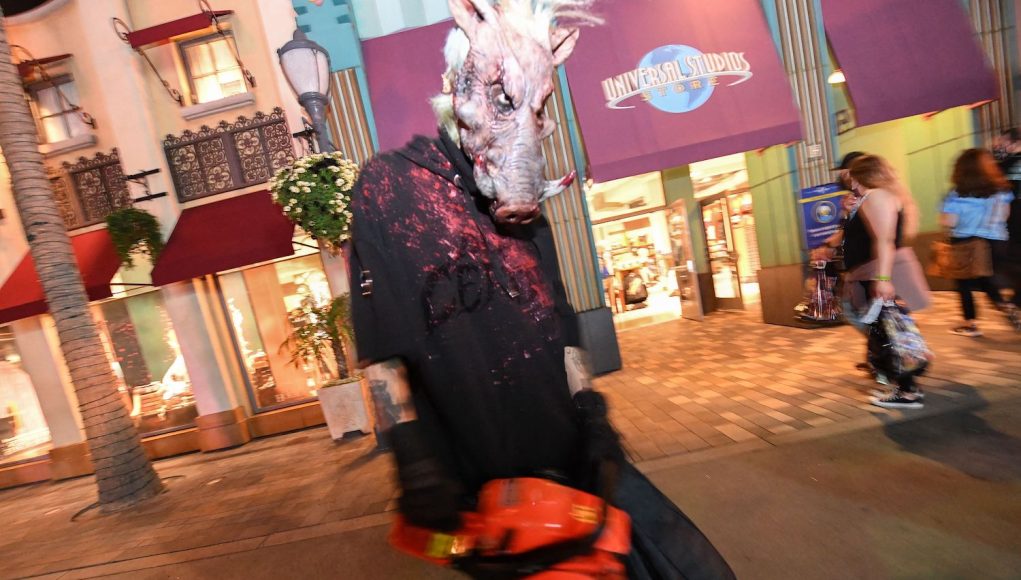 It’s just about halfway through October and that means the city of Los Angeles, in addition to now being dotted with so many decorative gourds, also has several Halloween-based delights popping up as we hit peak spooky season. Sadly, the traditional West Hollywood Halloween Parade is dead for another year, but at least we have corporations and cultural institutions to keep the spirit of Halloween alive. From haunted houses and dinner experiences to fun for all walking trails, this year’s activities are not going to disappoint Angelenos looking to get a little festive Halloween fun. Without further a-boo! here are some of our top picks.

Halloween Horror Nights at Universal Studios Hollywood brings together the sickest minds in horror to immerse guests in a living, breathing, three-dimensional world of terror inspired by TV and film’s most compelling horror properties.

For the first time ever, multi-award-winning artist The Weeknd joins forces with Universal Studios’ Halloween Horror Nights to inspire all-new, terrifying haunted houses based on his record-breaking album, After Hours. With this soundtrack reverberating throughout the experience, guests will step into a surreal living nightmare filled with grotesque characters and themes, all inspired by The Weeknd’s music and short films. As guests are stalked by slashers, bandaged maniacs, gruesome toad-like creatures, and other unfathomable horrors from the mind of the artist, they will be challenged to survive the night while trapped within the terrifying, unexpected world of The Weeknd: After Hours Nightmare—a place that sprung from his vivid imagination.

“I always wanted my own Halloween Horror Nights haunted house as Halloween has always been significant to my music, so this is a total dream come to life,” Abel Tesfaye, aka The Weeknd, says in a press release. “I feel like my music videos have served as a launching pad for a collaboration like this, and I cannot wait for people to experience this madness.”

Also on the lot is the Terror Tram, which invites guests to explore parts of the famous movie studio backlot, the home to some of the most notorious horror movie sets. Once guests disembark the Tram, the terror is unleashed. This year, the villainous Hollywood Harry unravels Hollywood Harry’s Halloween, a nightmarish spectacle with a cast of demented characters that winds past the iconic Psycho House and then through Steven Spielberg’s War of the Worlds set. As guests make their way through a choreographed massacre at the set of Jupiter’s Claim, from this summer’s hit movie Nope, they’ll encounter The Tethered, from Us, in a frightening finale. Following the success of the Us house in 2019, this experience will feature all-new choreography by conceptual artist and choreographer Madeline Hollander.

Meanwhile, The Wizarding World of Harry Potter experience will be open during Halloween Horror Nights, inviting guests to experience some of their favorite attractions, including Harry Potter and the Forbidden Journey and Flight of the Hippogriff, and for the first time ever, Death Eaters—a group of Voldemort’s most devoted followers will roam Hogsmeade village, looking to find others willing to show loyalty to the Dark Lord’s cause.

Other attractions open include Jurassic World—The Ride; Transformers: The Ride-3D; Revenge of The Mummy—The Ride; and The Simpsons Ride. For more information and to purchase tickets, click here.

Nights of the Jack, Calabasas

L.A.’s leading immersive event, Nights Of The Jack, the ultimate Halloween experience for the whole family, is back for its 5th year and is bigger and brighter. Welcoming over 100,000 guests every year, greater L.A. area residents and celebrity fans alike are expected to visit Calabasas for the annual event, which includes thousands of hand-carved pumpkins, immersive scenes and walking trails, premium food, beverages and cocktails and more.

New for the 2022 season, Nights Of The Jack is adding four nights of trick or treating with live costume characters, occurring October 28-31. Also new for this year, live face painters and a brand-new jungle animal scene will be added to the immersive walking trail. Tickets are on sale at NightsOfTheJack.com. 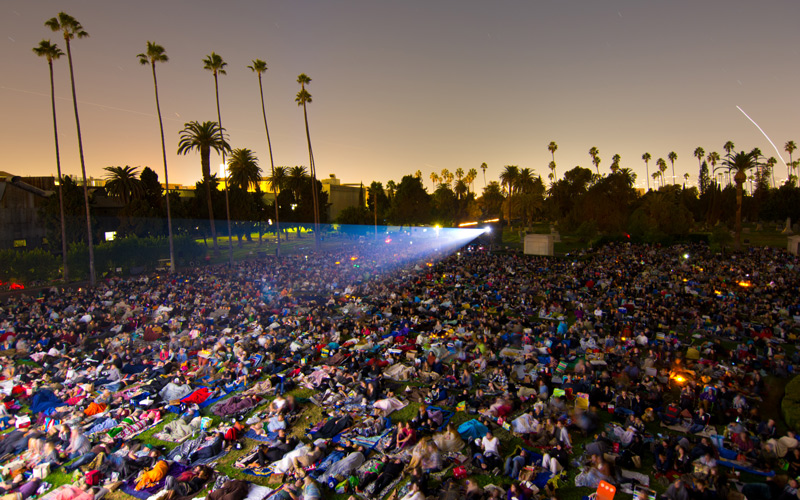 One of the Southland’s favorite cinematic experiences announced its screening lineup for the month of October and it includes The Thing (10/15) and Carrie (10/22) at Hollywood Forever Cemetery, along with Bram Stoker’s Dracula (10/29) at the Los Angeles Theatre, which will close out Cinespia’s 2022 outdoor season. For more information or to purchase tickets, visit www.cinespia.org.

For the uninitiated, Descanso Gardens is 150 acres of lush California gardens, woodland, and chaparral, backdropped by the San Gabriel Mountains and home to the Boddy House–a 22-room monument to classic Hollywood Regency architecture. Basically,  it’s a picturesque field trip any time of year— but it takes on a particular kind of magic from October 7-31, when the Gardens put on Carved, a Halloween panoply of sorts. You’ve got your classic hay maze, pumpkin sculpting, a Day of the Dead installation at the amphitheater, UV blacklight activities, a pumpkin house, and more. The real magic, however, can be found while walking through the hundreds of carved pumpkins lining the Camellia Forest. The famed faces of everyone from Edward Scissorhands, Harry Potter, Frankenstein’s monster—even Frozen’s Anna and Elsa carved and lit up in the dark of the California wilderness achieve a special blend of magic, nostalgia, and spookiness sure to bring out the little kid in anyone. Entry times for Carved run every half hour from 6-9 and are $20-26 for members and $32-$38 for nonmembers. Get your tickets here.

This haunted Griffith Park hayride once again returns to the mid-’80s fictitious town of Midnight Falls, where the leaves turn brown and the veil between the living and the dead is at its thinnest. The Witch of the Woods has cast her spell to summon the spirits of the underworld to cross over and assimilate into form. The Hayride leads to a thrilling adventure of horrors afflicting the town. Dazed within the spell cast upon them, the Witch commands her army of crops and flesh to seek revenge on the people that have casted her out. The Spirit of Halloween comes to life surrounding helpless victims brave enough to board The Hayride. Tickets are on sale for select nights from September 23 to October 31.

The 15-time All-Star and basketball Hall of Famer Shaquille O’Neal is teaming up with ABG Entertainment and Thirteenth Floor Entertainment Group for the first-ever Shaqtoberfest Halloween event, taking place at the historic Queen Mary in Long Beach. Officially open to the public beginning late September through Halloween, the interactive experience will be the ultimate destination for family-friendly fun, ghoulish games, delicious treats, specialty libations, frightfully fun nighttime haunted trails, and exciting live entertainment that encapsulates O’Neal’s playful personality. For more information and to stay up to date on ticket information visit  Shaqtoberfest.com.

This is a fully immersive indoor circus show and dinner theater that will whisk you into the year 1952 in the small town of Jupiter, Florida. While paying homage to the best-known freak show around, the show also is also a unique and elevated blend of death-defying acts and stunning spectacle—both live on stage and all around you, with dangerously delicious tapas-style plates and to-die-for drinks. Reservations are recommended and a seat costs $50, which includes premium table seating, dinner, and the full show. To book visit karnevilla.com and follow the reservation links.

The Los Angeles Philharmonic is celebrating this Halloween with a screening of the genre-defining German expressionist masterpiece The Cabinet of Dr. Caligari. Director Robert Weine’s horrific magnum opus has long been lauded as one of the most important films of all time. Over one hundred years since its original release, the enduringly sinister and disturbingly crooked silent film will be shown at the Walt Disney Concert Hall, accompanied by the haunting, atmospheric tones of the L.A. Phil’s monster pipe organ, played by the virtuosic Clark Wilson. The event will begin at 7:30 p.m. on October 31 with tickets ranging from $35 to $46.

Stay on top of the latest in L.A. news, food, and culture. Sign up for our newsletters today.