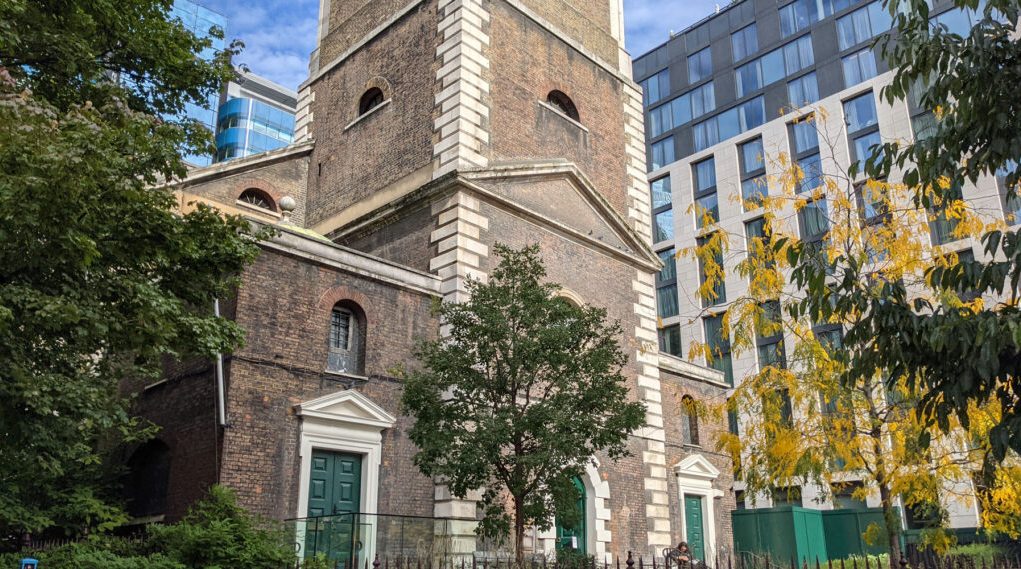 On the eastern boundary of the City of London is a church dedicated to the patron saint of boundaries. This is St Botolph without Aldgate and Holy Trinity Minories, which is a mouthful, so it’s more often abbreviated to the much easier Aldgate Church. 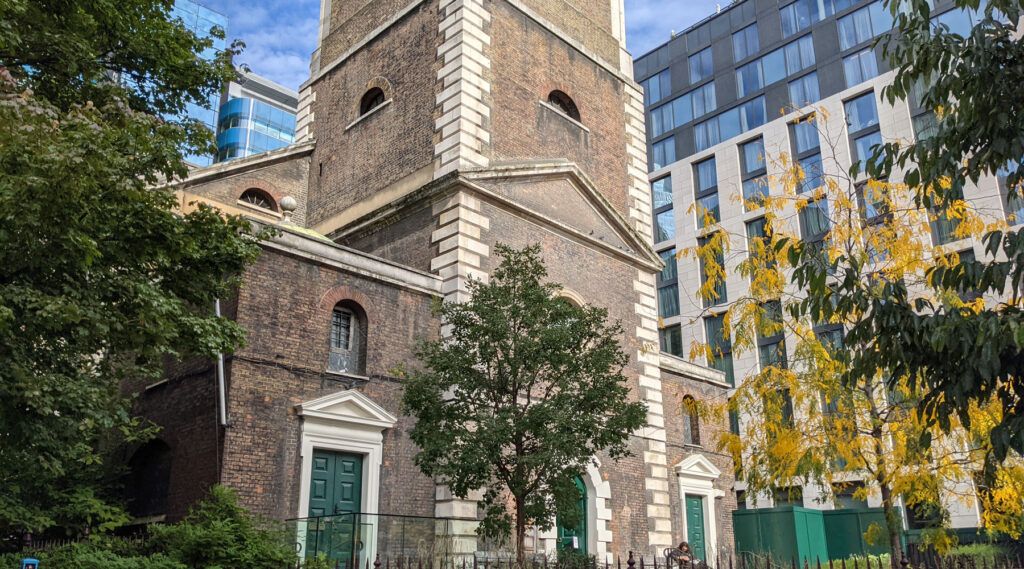 It’s named after Saint Botolph, who died around 680, and was an English abbot and saint. He is regarded as the patron saint of boundaries, and by extension, of trade and travel. The City of London had four churches along its Roman Wall devoted to the Saint, of which three survive, including this one at Aldgate.

There’s been a church here since at least 1115, although there’s suggestions that it could be older. The medieval church was rebuilt in the 16th century, and although that building survived the ravages of the Great Fire of London, it didn’t survive changing fashions, and was completely rebuilt in 1741-44, and that’s the church we see today.

The dark brick exterior of the church is also a bit misleading as it’s made from yellow stock bricks, but was darkened by Victorian pollution. It could be cleaned, but a bit like when they cleaned 10 Downing Street in the 1950s and people really didn’t like the cleaned bricks, so to clean the church would just look wrong. It’s dark and is likely to remain so.

The darkness of the exterior is a total contrast though to the interior, which has taken the concept of whitewashing to its near limit, with not just the walls painted white and the columns painted white, but also the ornate ceiling decoration all whitewashed. 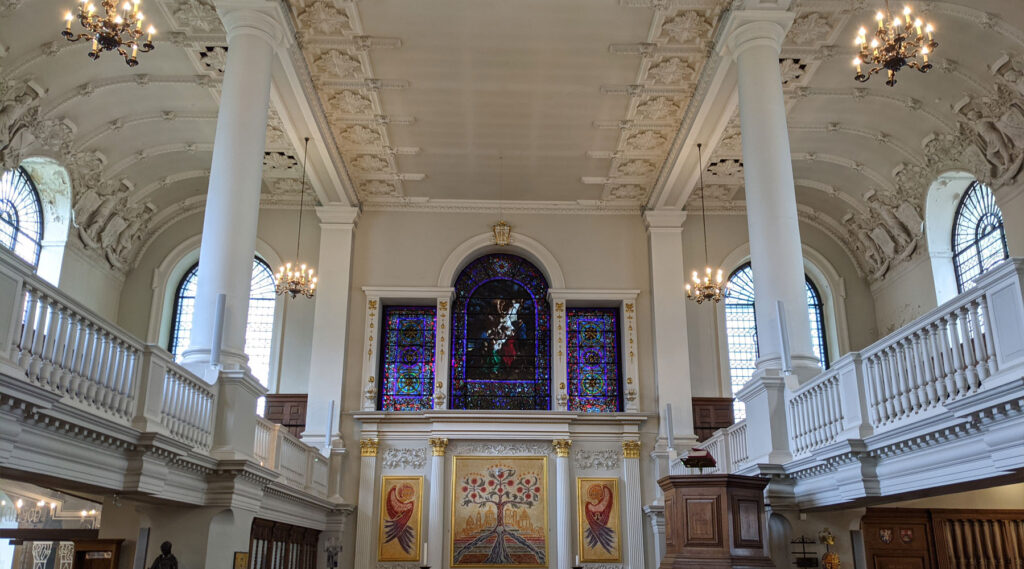 Eyes down and you get wooden pews that have avoided the whitewashing, but heavenward and the lack of colour is almost a bit of a shock considering the richness of the decorative plasterwork. That plasterwork really deserves looking at, with a deep frieze lined with carved angels supporting coats of arms of the City of London’s livery companies. 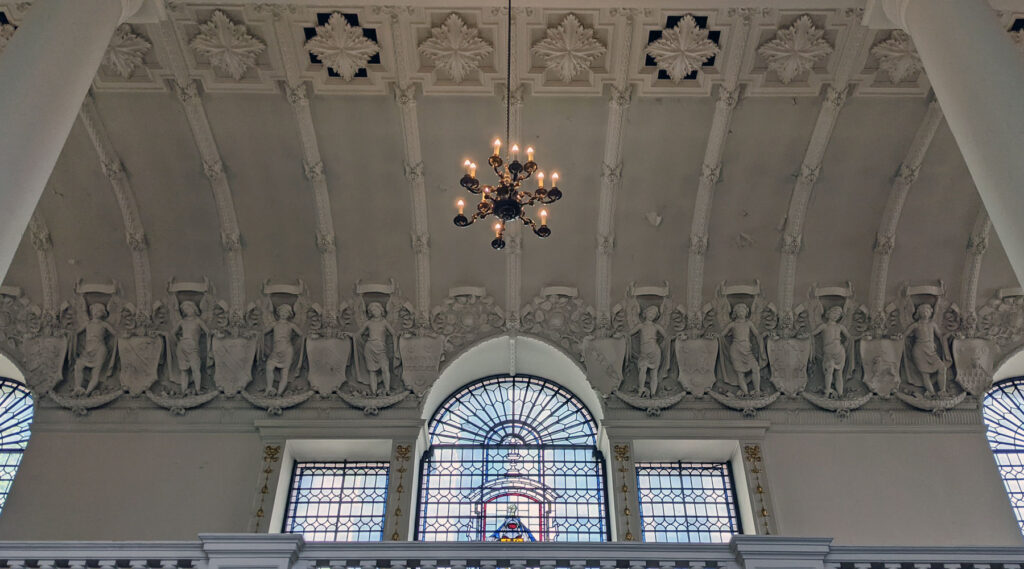 Look closely next to the pulpit and there’s an ornate ironwork stand, and that’s for the Lord Mayor’s sword should he or she ever visit. Several churches have them, a legacy of when the Lord Mayor would visit a different church each Sunday, and his sword of state needed somewhere to rest.

St Botolph’s has the oldest working church organ in the country. Pre-dating the current church (c1705), it is attributed to the organ builder Renatus Harris.

There’s also an empty niche by the entrance, and do read the notice that’s there — as it used to contain a bust of John Cass, who was a slaver, and the bust was removed last year. A sign remains to remind us of the decision and what used to be there, and to reflect on the decisions of our ancestors who not only traded in slaves, but applauded the people who did so by putting up statues of them.

Dotted around the church are a number of memorials as you expect, but the one to John Dow is particularly fine and also a rare burst of pre-puritan colour in this colourless space. There’s also a rather fine wood carving panel that was moved here when its previous home, a church down the road in Whitechapel was destroyed during WWII. 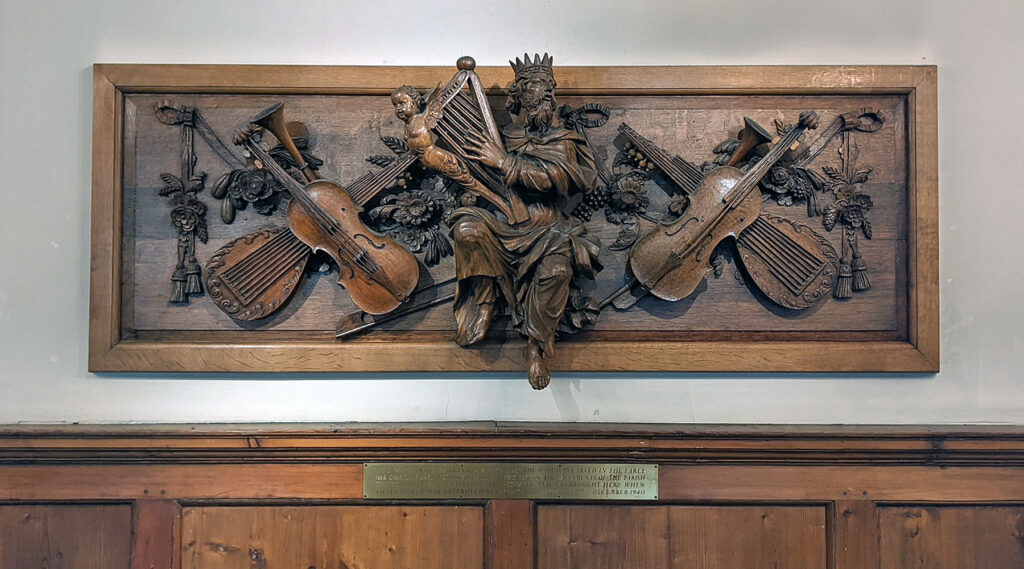 More recent is a stained glass window in memory of a former Lord Mayor of London who was elected in 1998.

It’s been suggested that the church was known for being regularly paraded around by prostitutes to avoid being accused of waiting on street corners, however, I can find only one source for that claim, so caveat emptor, especially as the church wasn’t on a traffic island at the time as claimed. There are no references to the Church of Prostitutes in contemporary newspapers or books that I can find, and all the other websites seem to have cited the same singular source as Wikipedia.

Sadly, as with the fashions of the time, after the war, the church was effectively turned into a roundabout as the area was redeveloped into a large road junction, but in recent years more sensible thinking has seen the roads removed and where there was once choking fumes, is now a public square and garden.

If you’re in the area, there’s also the remarkable medieval wall inside a nearby office that anyone can pop in and ask to have a look at. 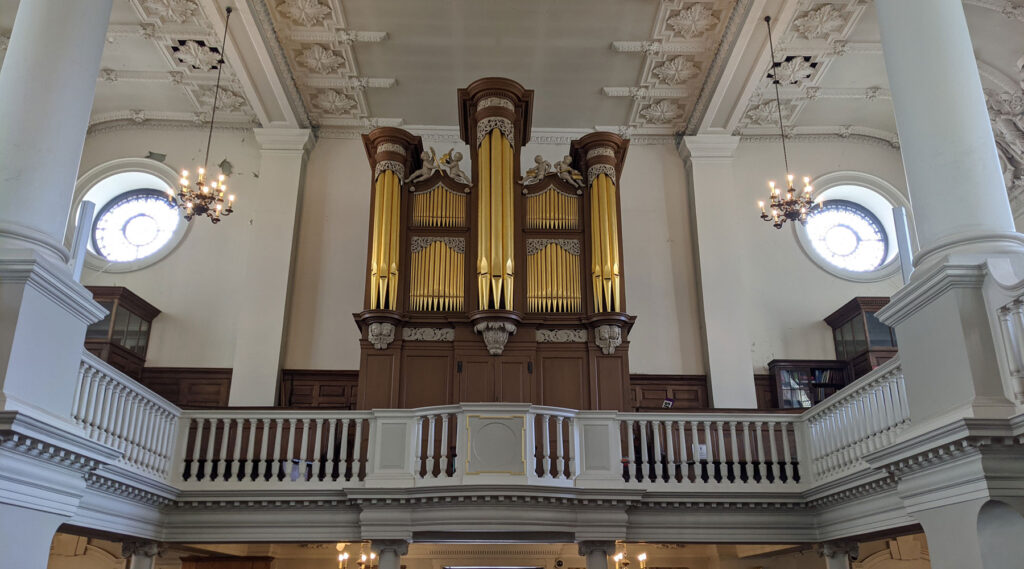 The post The church of St Botolph without Aldgate and Holy Trinity Minories appeared first on ianVisits.

5 things to know this Thursday, December 8